Survivor Wiki
Register
Don't have an account?
Sign In
Advertisement
in: Challenges, Recurring Challenges, The Amazon Challenges,
and 8 more

The Amazon
All-Stars
Gabon
Redemption Island
Log Jam (also known as Lake Log Jam) is a recurring physical challenge in Survivor. It debuted in Survivor: The Amazon and has reappeared in three subsequent seasons.

There is a revolving log over a pit of mud or water. All castaways will compete against each other in one-on-one matches. Whoever outlasts their opponents wins.

In team and tribal based challenges, the winner earns a point for their team or tribe. The tribe who reaches a certain amount of points win.

This challenge was first used in Survivor: The Amazon. Deena was chosen to sit out as the matches were man-on-man and woman-on-woman. In this appearance, the winner was the first tribe to reach five points. Dave, Butch, and Christy won all their respective rounds for the Tambaqui tribe. They won a large fruit basket and various seasonings.

This challenge returned in Survivor: All-Stars. Tom was chosen to sit out of the challenge because all matches are of the same gender. The winner was the first tribe to gain five points. Jenna L., Rob M., and Amber all won their respective rounds, winning the Chapera tribe the items that Jenna L. selected to steal from the Mogo Mogo camp.

The challenge made its return in Survivor: Gabon. Unlike the past two appearances, this was an pre-merge individual Immunity Challenge. The winner of the match advances to the next round. The last person standing in the last round wins immunity. In the first round, Ace, Charlie, Marcus, Randy, Sugar, and Bob outlasted Dan, Crystal, Matty, Susie, Ken, and Corinne respectively. In second round, Ace beat Charlie, Marcus beat Randy, and Sugar outlasted Bob. In the final round, all three remaining competitors were on the log. Sugar was the first person out. Marcus outlasted Ace and won individual immunity. He then awarded a second individual immunity to Sugar.

In Survivor: Redemption Island, the challenge appeared as an individual Immunity Challenge, accompanied with reward. The castaways paired off, with the winners progressing to the next round and the last person standing wins. Grant won immunity and a giant chocolate cake, the latter of which he was permitted to share with two other tribe mates. He chose to share the cake with Andrea and Rob. 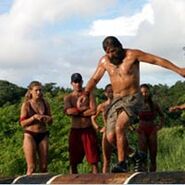 Susie versus Randy in Gabon.

Ace taking on Marcus in Gabon.

Phillip vs. Natalie in Redemption Island.