"It Hit Everyone Pretty Hard"

Like a Wide-Eyed Kid in the Candy Store is the seventh episode of Survivor: Micronesia.

The episode starts with Malakal huddled around the campfire, discussing the fate of the three remaining chickens. Tracy and Ozzy argue whether to kill them now or keep them around to lay eggs.

Over at Airai, James becomes annoyed at his tribe's constant complaining about the conditions. Kathy especially seems affected by the hardships of the game, stating that there are good days and there are bad days, and today is a bad day.

Back at Malakal Erik fawns over Ozzy's survival skills, and tries to learn as much as he can from Ozzy. Cirie notices this relationship and compares them to The Lion King. The tribe decides to row their boat to the back beach in order to catch bigger fish. Cirie expresses her fears, not being a strong swimmer and never have been so far out in the ocean before. The tribe tries to convince her to join them in the water, but Cirie decides to stay in the boat.

At the reward, Ozzy expresses his pride over winning, and how funny it was watching Erik finally get to experience a reward. Ami, Amanda, and Ozzy go to shower together, which Cirie finds hilarious.

The mood is completely different on Airai, with a storm hitting the beach. Kathy points out how different it is watching the show from home and actually experiencing it in real life. She talks about how savage it is, everybody clawing at the food and sleeping in the dirt.

The next day Kathy is still feeling depressed, which is much worse when she no longer feels connected to her family. Kathy finally reaches her breaking point and decides to quit the game. Kathy profusely apologizes to her tribe for letting them down, but the tribe is more concerned with Kathy feeling better, rather than being disappointed with her for quitting. Despite the loss of one of their tribe members, the game still continues for everybody left.

Early in the morning on Malakal beach, Cirie and Amanda discuss Ozzy's arrogance and make shaky plans to eliminate Erik in order to weaken Ozzy.

At the challenge, Malakal is shocked to see Kathy has quit. Jeff explains the challenge and the game is underway. Once again Malakal takes the early lead, with Airai struggling to keep up. During the puzzle stage, however, Airai manages to catch up and eventually win the challenge.

Back at camp, Amanda apologizes for her poor performance in the challenge, and the Favorites discuss who to eliminate between Erik and Tracy. Ami comes up with a plan to get the Favorites to split the votes so she, along with the remaining Fans can blindside Ozzy. The Favorites are conflicted between sticking with Ozzy and voting out Tracy, or weakening Ozzy and voting out Erik or Ozzy. Everybody is unsure going into Tribal Council.

At Tribal Council Jeff points out how poorly the tribe is doing, and how the only reason they still have a shot is because of the other tribes' misfortunes. Tracy immediately calls out Ozzy as the leader, which he instantly rebuts. The tribe generally seems to agree that Ozzy is a leader, however, he is a necessary leader. Ami talks about how voting out the future threats now may be the smartest move, which worries Ozzy. Tracy also pushes hard against voting Ozzy out, which comes back to bite her as it causes the tribe to turn on her, eliminating Tracy in a 5-1 vote. 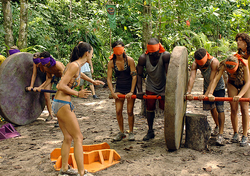 Challenge: Money Roll
Four members of each tribe would be blindfolded and push a large money stone through a forest course while being verbally directed by the two other tribe members. Along the course, the money stones would crush four tiles that would reveal a pair of smaller money stones. Three tribe members would then use these eight stones to solve a rotating cog puzzle.
Reward: A trip to an island to enjoy a spa and food
Winner: Malakal (exiled Jason Siska and Tracy Hughes-Wolf)

Retrieved from "https://survivor.fandom.com/wiki/Like_a_Wide-Eyed_Kid_in_the_Candy_Store?oldid=522661"
Community content is available under CC-BY-SA unless otherwise noted.