Palau
Micronesia
Caramoan
Last Gasp is a recurring challenge in Survivor. The challenge debuted in Palau and has since appeared in Micronesia and Caramoan.

The players must swim under a steel grate and stay above the water. As the tide rises, player will run out of breathing room. If the fear of drowning is too much, that person can bail out. The last person remaining under the grate wins the challenge.

The challenge reappeared in Survivor: Micronesia as the first Immunity Challenge for the newly merged Dabu tribe. Ultimately, it came down to Jason Siska and Ozzy Lusth. Ozzy bailed out, giving Jason the immunity win.

The challenge was most recently used in Survivor: Caramoan, it was the second individual Immunity Challenge. After John Cochran, Eddie Fox, and Reynold Toepfer dropped out in succession, only Andrea Boehlke and Brenda Lowe remained. Eventually, Andrea opted out, making Brenda the only woman to win this challenge. 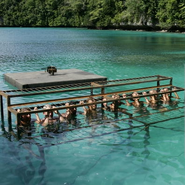 The challenge as shown in Palau.

The challenge in Caramoan.