Merged with Casaya on Day 16

La Mina​​, known informally as the Older Men, is a tribe from Survivor: Panama.

Though originally comprised by middle-aged men, La Mina is often associated to its post-switch iteration which despite having a cohesive unit, proved weaker in the challenges compared to Casaya, putting them at a numbers disadvantage after the merge. Their tribe color is orange.

At the start of Survivor: Panama, the contestants were shocked to learn that the tribes would be divided by gender and by age. The La Mina tribe consisted of the seasons oldest four male contestants, namely Terry Deitz, Bruce Kanegai, Dan Barry and Shane Powers. At the first Reward Challenge, Terry was selected to compete for La Mina. La Mina came in first place, winning flint and making camp life easier. The tribe bonded well, built a strong shelter, and made fire early on. The tribe went on to win the Immunity Challenge, finishing in second and keeping the Older Men safe from the first Tribal Council. On Day 4, Viveros and Bayoneta were dissolved, which was followed by a tribe switch, meaning the Older Men were no more.

The tribe switch had Dan and Terry remain in the tribe along with ex-Viveros members Austin Carty and Nick Stanbury, ex-Bayoneta members Misty Giles and Sally Schumann, and ex-Casaya member Ruth Marie Milliman. Almost immediately, the men of the tribe formed a tight alliance. The tribe won the Immunity Challenge.

La Mina continued their winning streak by winning the Reward Challenge in "Crazy Fights, Snake Dinners", but lost the Immunity Challenge, sending La Mina to their first Tribal Council. Before Tribal Council, Nick and Austin made an alliance with Sally and Misty, while Dan and Terry made an alliance with Ruth Marie. Dan and Terry managed to convince Austin and Nick to go against their new alliance and vote off Misty for her strategic gameplay.

La Mina lost the next Reward Challenge and the next Immunity Challenge. The men's alliance deemed Ruth Marie to be too much of a physical liability and she was voted off. La Mina's losing streak continued, losing the Reward Challenge in "For Cod's Sake". They were able to win the Immunity Challenge though. In "Salvation and Desertion", Casaya won the combined Reward and Immunity Challenge and won the right to choose a member from La Mina to be sent to Exile Island, thus becoming safe at Tribal Council. Casaya chose Sally because they thought she was the weakest member of the tribe, causing La Mina to vote off a strong member. Since Sally was safe from Tribal Council, the men's alliance was forced to turn on itself. After a tough decision, Dan was unanimously voted out because he was the weakest member of the tribe.

On Day 16, La Mina and Casaya merged into Gitanos. The former La Mina members went into the merge with a 6-4 disadvantage.

La Mina in the opening.

La Mina wins their first challenge as a new tribe. 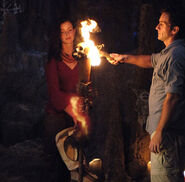 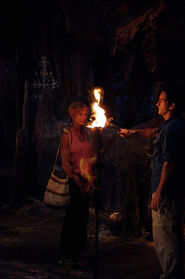 Dan is saluted after being voted out.

La Mina about to land on Casaya beach for the merge.
Add a photo to this gallery

Retrieved from "https://survivor.fandom.com/wiki/La_Mina?oldid=585743"
Community content is available under CC-BY-SA unless otherwise noted.