Survivor Wiki
Register
Don't have an account?
Sign In
Advertisement
in: Tribes, The Australian Outback Tribes, Starting Tribes,
and 4 more

Merged with Ogakor on Day 19

Kucha is a tribe from Survivor: The Australian Outback.

Initially the weaker of the two tribes, Kucha managed to win three consecutive Immunity Challenges. Later in the game, the tribe's intertribal dynamics were to their detriment after the merge. Their tribe color is blue.

Personalities on the tribe clashed early, as Kucha had trouble navigating the hike to their campsite. Many of the castaways were annoyed by Debb Eaton, who took the reigns and rubbed people the wrong way with her outspoken personality. She wasn't the only over-the-top persona in the tribe: Michael Skupin annoyed some with his overbearing leadership, and Kimmi Kappenberg earned the ire of the tribe due to her loud voice and raucous antics. After losing badly in their first Immunity Challenge on Day 2, the tribe was divided between eliminating Debb, who had been annoying the tribe with her bossy behavior, or Jeff Varner, who had been sick since getting off the plane. In the end, Kucha decided that Debb should go home, with a unanimous 7-1 decision.

As Kucha settled into life in the Outback, Michael emerged as the tribe's leader and provider. In spite of his survival capabilities and physical prowess, Michael's leadership was resented by some members of the tribe, particularly in the grandiose way he would make the tribe convene for prayers before a meal. Other members took different roles: Alicia Calaway emerged as the tribe's motivator, Rodger Bingham as the group's moral center, and Elisabeth Filarski as the team cheerleader.

The Day 4 Reward Challenge involved jumping off a cliff and swimming down treacherous rapids. This was doubly intimidating to Rodger, who feared both heights and water. Even though Kucha ended up losing the challenge, Rodger was looked upon with admiration due to his courage in facing his fears. It was at this challenge that Kimmi accidentally revealed to the Ogakors that Jeff had received a vote at the previous night's Tribal Council.[2]

The Day 5 Immunity Challenge had the tribe members choking down various exotic "local delicacies." Kucha was put at a disadvantage when vegetarian Kimmi refused to compromise her morals and eat a cow brain. However, Kimmi redeemed herself by eating a mangrove worm in the tiebreaker round and kept Kucha from attending its second Tribal Council.

Kucha managed to continue winning Immunity Challenges and avoid Tribal Council, allowing the castaways to build relationships with one another. One such friendship was between Alicia and Jeff, who enjoyed each other's personalities and often strategized with one another. Elisabeth and Rodger also formed a bond that would last throughout the game, with Elisabeth referring to Rodger as her "Outback Daddy."

Despite its harmonious appearance, Kucha was not without its share of conflict. Alicia and Jeff became annoyed with Nick Brown's lack of work ethic, feeling that he would only work on activities that were not necessary to the tribe's survival. Kimmi became aggravated with the rest of her tribe when Michael slaughtered a pig and displayed the corpse back at camp. This wasn't the first time Kimmi's vegetarianism had alienated her from the tribe, and it wouldn't be the last.

On Day 10, Kucha won a Reward Challenge that entitled them to three egg-bearing chickens and a rooster. The tribe felt that Kimmi had become too attached to the chickens, and was thus overly distraught when they were slaughtered. Kimmi countered that the tribe should simply kill the birds at a slower rate, in order to spread their protein intake over a longer period. It was this point that got her into a heated argument with Alicia over her attachment to the birds. The ensuing screaming match remains one of the most iconic scenes in Survivor history.

When Kucha lost the fifth Immunity Challenge, Kucha finally returned to Tribal Council on Day 15, nearly two weeks after their first visit. The tension between Alicia and Kimmi weighed heavily on people's votes, and in spite of her strong work ethic, Kimmi was voted out of the tribe unanimously 6-1. Kucha then managed to rebound from their previous loss by winning the next Reward Challenge, winning them a picnic of Doritos and Mountain Dew. Despite the victory, on Day 17, tragedy struck on the tribe. While tending to the fire, Michael inhaled a large amount of smoke and passed out face-first into their bonfire. The ensuing events resulted in the loss of most of the skin on his hands. Michael was airlifted from the game to stunned reactions from his tribemates. The news immediately reached the rival Ogakor tribe, announcing the cancellation of what should have been their sixth/final tribal Immunity Challenge via Tree Mail. After the fateful accident, Kucha was now even with Ogakor going into the merge with five members each.

On Day 19, Elisabeth and Alicia went to the Ogakor camp, while Jeff, Nick, and Rodger entertained the opposing tribe's men (Colby and Keith) at the Kucha camp. The tribes received notice of the imminent merge, and on Day 20, the two groups reconvened at a new beach to form Barramundi. 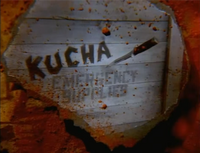 Kucha's shot in the intro. 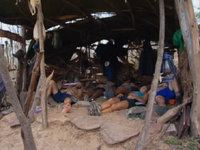 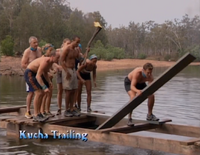 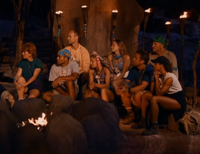 Kucha at their first Tribal Council. 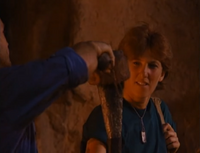 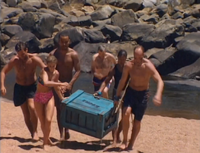 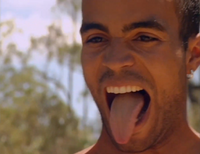 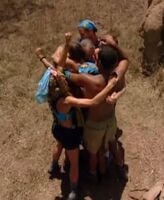 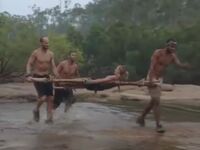 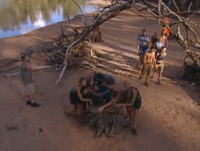 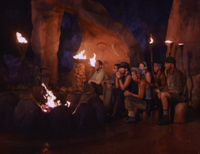 Kucha at their second Tribal Council. 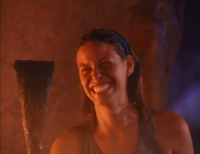 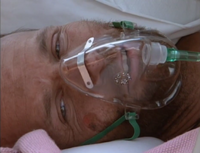