Kasama is the merged tribe of Galang​ and Tadhana from Survivor: Blood vs. Water. Kasama's tribe color is purple. 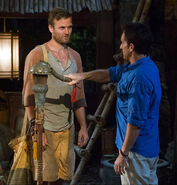 Katie is sent to Redemption Island by the white rock.

The Day 35 Immunity Challenge, Pulled Up.

The final 5 at Tribal Council.

Tina voted out for the second time.

Tyson is the Sole Survivor of Survivor: Blood vs. Water.