Merged with Timbira on Day 19

Jalapao is a tribe from Survivor: Tocantins.

Jalapao started out as a cohesive tribe, working well together in challenges and at camp. But despite winning many rewards, they lost more Immunity Challenges to Timbira, putting them at a 6-4 disadvantage come the merge. However, the remaining Jalapao members took advantage of Timbira's dysfunction, allowing them to make it far in the game. Their tribe color is red.

Jalapao's shot in the intro. 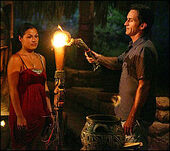