Survivor Wiki
Register
Don't have an account?
Sign In
in: Alliances, Survivor (U.S.), Survivor: The Amazon,
and 2 more

Jenna Morasca (Winner)
The Jaburu Alliance is the majority alliance of the Jaburu tribe, and later the Jacaré tribe, in Survivor: The Amazon.

While in their boat trying to catch fish, Jenna and Heidi voiced to Shawna about forming an alliance against the older ladies solely because there were more of them then the "younger, prettier girls". Deena Bennett then joined the alliance the next day after being approached by Shawna about joining because she felt that she could easily control the young women.

After the losing the Reward Challenge on Day 11, Shawna had a breakdown and asked to be voted out. Jaburu then lost the Immunity Challenge the following day and she asked for her request to be granted. However, Deena wanted to vote out JoAnna Ward because of her threatening status. Deena felt that Shawna needed to be stronger, so she convinced Christy Smith to vote out JoAnna. Deena's plan came to fruition and JoAnna was blindsided in a 4-2-1 vote. Jeanne Hebert then became the alliance's next target after she lashed out because of her friend's oust.

Taking in the Men

After a tribe switch occurred on Day 13, Alex Bell, Matthew von Ertfelda, and Rob Cesternino joined Jaburu, forming a 3-3 split. Shawna sparked back up in the presence of the men, especially Alex. Deena was concerned that Shawna may be more interested in Alex than in the alliance. New Jaburu won immunity on Day 15, further budding Alex and Shawna's romance. Jaburu then lost the Immunity Challenge, and Alex and Shawna decided to vote out Matthew. However, Deena felt that Shawna was more interested in Alex than in the game. At Tribal Council, the alliance decided to vote out Shawna in a 4-2 vote.

When the merge came around on Day 19, the new Jaburu tribe decided to stick together and take out Butch Lockley, Dave Johnson, and Roger Sexton.

At the merge, the women of Jacaré viewed Roger as a chauvinist for excluding them in building the shelter he so desperately wanted to build. Deena and Roger particularly butted heads throughout the first three days of the merge. Heidi and Jenna convinced Deena to target Roger stating he would not voluntarily vote for a woman at Final Tribal Council. At the Immunity Challenge, Deena won immunity and Christy became the men's target. Eventually in the end, Roger was voted out in a 7-3 vote.

Dave quickly followed Roger as he was viewed the biggest threat physically when he was voted out unanimously.

The Guys Take Over 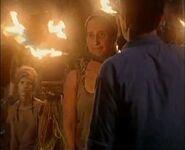 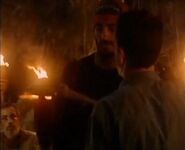 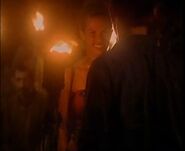 Jenna is announced as the Sole Survivor.