View source
watch 02:19
What is Immunity Necklace?
Do you like this video?
Play Sound

Exemption from being voted against at Tribal Council

Every season
The Immunity Necklace (also called the Talisman in earlier seasons) is awarded to an individual or in rare cases individuals, post-merge who has won an individual Immunity Challenge.

When a contestant is in possession of the necklace, it is brought back to camp and typically placed on the shelter. While other castaways can "try on" the necklace, ownership lies solely with the winner and cannot be stolen by another, unless the winner decides to give up the necklace.

From Survivor: Borneo to Survivor: Africa, the necklace was non-transferable, leaving allies vulnerable. Starting from Survivor: Marquesas, the necklace became a transferable item, permitting a castaway to hand it to another. The necklace can only be transferred before the votes are cast. In recent seasons, Jeff Probst has stopped asking the castaways if they want to give up the Immunity Necklace, but castaways can still give it up on their own terms if they wish to.

Typically, the Necklace will fit with the motif of the season, with some tribal design or small tiki attached. Other designs include feathers, tiki heads, skulls, and even teeth. A winning contestant will wear the necklace at Tribal Council around their neck to indicate their exemption from being voted against.

During Survivor: Nicaragua, both tribes competed for individual immunity. In previous seasons, two necklaces would both be similar in appearance; however, La Flor and Espada had their very own unique designs and tribal colors, with either a Fleur de Lis or a Sword.

During Survivor: Micronesia, as a part of a first challenge, a special idol is placed on the front of the rafts of both the Airai and Malakal tribes. The rule is almost the same as the necklace, only the possession right lasts until their tribe's first Tribal Council. The Immunity Idol was found by Yau-Man Chan and Kathy Sleckman respectively (technically, Jon Dalton found the idol first; however, he mistook the opposing tribe's idol for his, and Yau-Man reached theirs first). The two idols were both removed from the game by Day 6, as both tribes went to Tribal Council once each in the first six days.

In Survivor: Gabon, there were two individual Immunity Idols, one for each tribe. The Idols was placed at the top of the hill. The first person to each the idol gets it for their tribe. Marcus Lehman and GC Brown got to the Immunity Idols for their respective tribes. The idols were both removed from the game by Day 9. 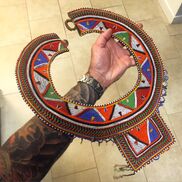 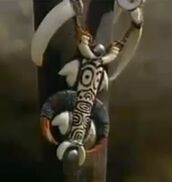 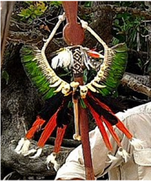 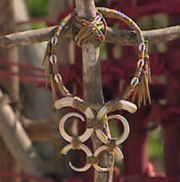 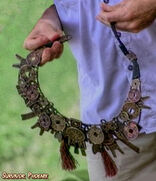 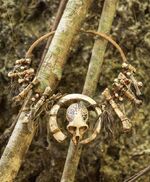 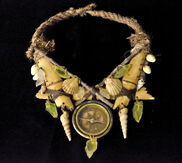 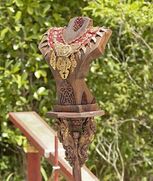 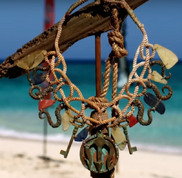 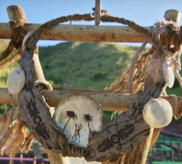