Hands on a Hard Idol

Keeping one hand on the Tribal Immunity Idol at all times, contestants would have to keep their balance while standing on a small log. If at any point a contestant takes their hand off the Idol, falls off the log, or raises their foot, they would be eliminated from the challenge. The final player left holding onto the Idol would win.

The challenge first appeared as the Final Immunity Challenge of Survivor: Borneo. Richard Hatch dropped out of the challenge first assuming both competitors would not vote him off. Kelly Wiglesworth ultimately outlasted Rudy Boesch to become the first winner of this challenge.

When it reappeared in Survivor: Africa, Ethan Zohn dropped out of the challenge first after 2 hours and 26 minutes when he lost his balance. After 3 hours and 20 minutes, Lex van den Berghe dropped out due to stomach pains, granting Kim Johnson immunity.

The challenge was again used in Survivor: Marquesas. When Neleh Dennis told Kathy Vavrick-O'Brien her shirt was falling down, Kathy tried to fix her shirt, causing her to lose her balance and drop out of the challenge. Straight away Vecepia Towery struck a deal with Neleh; Vecepia would lose the challenge intentionally if Neleh promised to take her to the Final Tribal Council. Neleh accepted the deal, winning immunity. 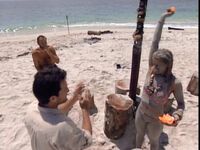 Kelly wins and secures a spot at Final Tribal Council in Borneo. 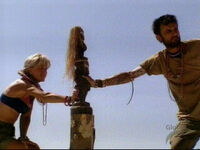 Lex and Kim battle it out for immunity. 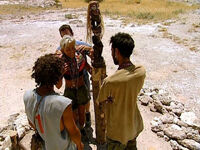 Kim wins and secures a spot at Final Tribal Council.

The women competing in Marquesas.

Neleh and Vecepia during their Final Immunity Challenge.

Neleh wins the challenge due to a last minute deal.

Rob, Amber, and Jenna during their Final Immunity Challenge in All-Stars.

Rob wins the challenge.
Add a photo to this gallery

Retrieved from "https://survivor.fandom.com/wiki/Hands_on_a_Hard_Idol?oldid=579967"
Community content is available under CC-BY-SA unless otherwise noted.