Africa
Vanuatu
Get Your Goat (also known as Pig Pen) is a recurring physical tribal challenge that originated in Survivor: Africa and returned in Survivor: Vanuatu.

The challenge first appeared in Survivor: Africa. It was used as the first challenge after the tribe switch. The newly formed Boran tribe defeated the new Samburu tribe to win three egg-laying chickens and a rooster.

In Survivor: Vanuatu, the challenge was a Reward Challenge. The tribes raced to collect pigs instead of goats, where the Lopevi tribe was victorious, winning steak and eggs as a reward.

Clarence with a goat for Boran (Africa). 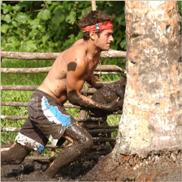 John K. tries to catch a pig for Lopevi in Vanuatu. 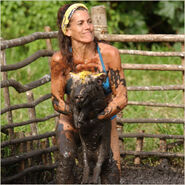