Nicaragua
South Pacific
Ghost Island
Island of the Idols
Winners at War
Get Barreled (also known as Sandbagging, A Quick Affair, Full Tilt Affair, and 5 on 5) is an accuracy challenge that originated in Survivor: Nicaragua, was modified for a Duel in South Pacific, and further modified as an individual challenge in Ghost Island.

Each tribe must race to retrieve ten barrels from a field and roll them back to a designated platform where the barrels must be placed upright. Once all the barrels are in place, one person at a time will attempt to land sandbags onto the top of the barrels. The first tribe to land a sandbag on each barrel would win the challenge.

The individual variant excludes the barrel retrieval, with the first person to land a sandbag on each of the designated set of barrels winning the challenge. In Ghost Island, this was reduced to a single sandbag, albeit with a smaller target to land on.

The challenge debuted in Nicaragua as a combined Reward/Immunity Challenge. Espada initially took the lead in the sandbag-tossing portion, but a communications breakdown amongst its members allowed La Flor to catch up and win immunity, sending Espada to Tribal Council.

In South Pacific, the first stage of the challenge was eliminated to accommodate a Duel, with each person now simply having to land a sandbag on each of the ten crates. Christine Shields Markoski narrowly beat Mark Caruso 10-9, earning the right to remain at Redemption Island, and permanently eliminating Mark from the game.

In Ghost Island, the challenge was used as part of the Family Visit. The castaways had to go over and under a series of obstacles, while untying and grabbing a sandbag along the way, then attempt to land the sandbag on a narrow table. While the challenge started evenly between the castaways, it ultimately came down to Domenick Abbate and Sebastian Noel, with Sebastian winning reward.

In Island of the Idols, the challenge was again used as part of the family visit, where the castaways were tethered in pairs and had to race across a series of obstacles while collecting a sandbag along the way, with the first pair to land their sandbag on top of a narrow disc winning. In a tight race between all four pairs, the team of Janet Carbin and Tommy Sheehan managed to land their sandbag on the disc first to win reward.

In Winners at War, the challenge was used as the final five Immunity Challenge, where castaways had to retrieve a key while going over and under a series of obstacles. They would then use the key to untie two sandbags, which they had to land on a narrow disc. The challenge came down to a race between Ben Driebergen and Tony Vlachos to land their second sandbag, with Tony ultimately landing his first to win immunity.

Espada retrieves a barrel in Nicaragua.

Dean and Elaine compete in Island of the Idols. 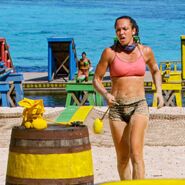 Sarah competes in Winners at War.