Merged with Foa Foa on Day 19

Galu is a starting tribe from Survivor: Samoa.

Galu proved to be the physically stronger tribe, winning eight of the ten tribal challenges against their rival Foa Foa tribe, in part due to Russell Swan's leadership. However, after the merge, tribal conflicts erupted, and Russell Hantz's gameplay emerged, causing its members to be eliminated in an almost consecutive order. Their tribe color is purple.

On the first day of the competition, the ten members of Galu were instructed to vote (based solely on first impressions) for a leader. They chose Russell Swan, who did not choose wisely in the first Reward Challenge. However, this was merely a speed bump on Galu's road to pre-merge domination, which became clear when the first eight days saw the tribe immune from the first few votes.

Whilst the tribe enjoyed early success, there were clear factions within the group. The girls' alliance of Laura Morett, Monica Padilla, and Kelly Sharbaugh and the men's alliance of Erik Cardona, Russell Swan, Dave Ball, John Fincher, and Brett Clouser left Shambo Waters a sitting duck.

After their first Tribal Council and the elimination of Yasmin on Day 11, Galu remained a force to be reckoned with in terms of challenge performance. However, Russell S. began to show signs of struggling at a Reward Challenge which led to his eventual evacuation. Jeff Probst instructed that the tribe elect a new leader. Erik took this opportunity to bring Shambo into the alliance and make her the leader in order to control her later down the line. Her reign as leader was short-lived and the majority of the time scrutinized as the decisions she wanted were regularly rejected straight away (one incident regarding who would be making decisions at a Reward Challenge).

Galu's shot in the intro.

Galu competes in the first Immunity Challenge, Yank Your Hank. 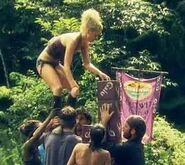 Galu during an Immunity Challenge.

Russell S. pulled from the game due to medical reasons.

Members of Galu at a challenge.

Galu returns to their camp from a challenge.