Survivor Wiki
Register
Don't have an account?
Sign In
Advertisement
in: Challenges, Recurring Challenges, The Australian Outback Challenges,
and 4 more

All castaways are stationed at a fire scale. Each structure is a seesaw with two buckets. One end has a bucket for building a fire, while the other has a bucket filled with water but with a hole at its base. The castaways first start a fire in the fire bucket. Then, once the flame is sustainable, the castaways fill the water bucket with water from a nearby river or ocean. When there is enough water, the weight of it lifts the fire bucket up to reach a fuse. The first castaway to light their fuse, igniting a fire at the top of the scale, wins the challenge.

In All-Stars, an additional stipulation was added that running out of matches eliminated a contestant from the challenge.

The challenge made its first appearance in Survivor: The Australian Outback as the final seven Immunity Challenge. All contestants started off relatively even. Nick Brown was the first person to get water, while Tina Wesson quickly followed. Eventually, Colby Donaldson was the last person to start fetching water. Keith Famie almost won the challenge, but his fire bucket did not reach the fuse. Ultimately, Colby lit his fuse first, winning his first of many individual immunities.

The challenge was reused in Survivor: All-Stars as the final six Immunity Challenge. Everybody except Amber Brkich managed to make a fire. However, the wind caused the fires to blow out. Eventually, Rob Mariano, Amber, Rupert Boneham, and Jenna Lewis all ran out of matches, eliminating them all from the challenge, leaving Tom Buchanan and Shii Ann Huang battling it out for immunity. Ultimately, Tom managed to reignite his fire and started to get water again. By the time Shii Ann was able to build a suitable fire, Tom had won immunity.

The castaways making fire in All-Stars. 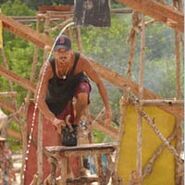 Shii Ann at the challenge in All-Stars.