Borneo
Africa
Marquesas
The Amazon
Gabon
Fast Fire, also known as Light It Up, Virtues of Fire, Light My Fire, and Fired Up, is a recurring challenge of Survivor.

Given an ample amount of fire-making essentials, contestants are to make a flame high enough to burn through a rope, raising a flag (in some cases, light a torch). First player to do so wins the challenge.

In Survivor: Borneo, the castaways had to collect driftwood from the ocean, light a torch, and start a fire high enough to burn through a rope. Gervase's torch repeatedly douses out while Richard won immunity easily.

In Survivor: Africa, the castaways must create fire using a magnifying glass. Kim P. is first to start a fire with Lex and Frank not far behind. As all three continue to gather more materials, one of Frank's branches touches his wick which, despite breaking it to raise his flag, disqualifies him from the challenge. Soon, other flames ignite. Kim P. tearfully panics as she tries to build her flame. In the end, Lex's fire burns his wick and raises his flag winning him immunity.

In Survivor: Marquesas, the players must race to gather firewood to place under a wok filled with oil and popcorn kernels. Using flint and steel, they then had to build a fire hot enough to boil the oil and pop the kernels. Once the kernels start popping, they must transfer the fire to the bottom of a station and build it to ignite a pyre at the top. The first to ignite their pyre wins. With other players struggling with their flint and steel and despite being second after Vecepia to start his fire, Robert is the first to get his popcorn popping. Wasting no time, Robert transfers his fire to his station where he continues to build it. Vecepia is next to pop her corn and quickly tries to catch up, but Robert's fire quickly builds high enough to light the pyre at the top of his station, winning him individual immunity.

In Survivor: The Amazon, the challenge was used for the first time as a tribal Reward Challenge. Each tribe had four ropes attached to a 30-foot tower. Each rope was attached to a fire-making station. The tribes must gather enough firewood in order to build a fire high enough to burn through all four ropes. Each time a rope is burned, a portion of a banner at the top of the tower was released. The first tribe to burn through all four ropes and release their banner won reward. Jaburu took an early lead, however Tambaqui managed to pull ahead by huddling over the fire pits and win.

In Survivor: Gabon, this was the first Immunity Challenge after the merge. Susie and Sugar were the only two castaways to get a fire started during the Immunity Challenge, with Susie being the first to burn through her rope to win individual immunity. 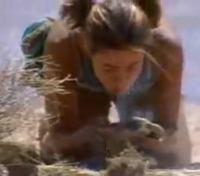