Merged with Kota on Day 27

Fang​ is a tribe from Survivor: Gabon.

Fang was one of two tribes with 9 castaways that began in "Want to See the Elephant Dung?". The tribe was known for their extensive losing streak in challenges during the pre-merge portion of the game, but managed to rebound post-merge by systematically eliminating the rival Kota tribe members. Their tribe color is red.

Fang at their first Tribal Council. 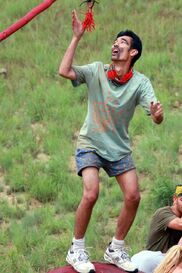 Fang at their second Tribal Council.

The members of Fang ranked before the first Tribe Switch.

Fang at their third Tribal Council.

The third incarnation of Fang on reward.