The remaining contestants answers questions about the eliminated contestants. The castaway to score the most questions correctly or the one who correctly answers ten questions first wins.

Fallen Comrades was first used in Borneo as the final four Immunity Challenge. After a very close contest, it ultimately came down to Kelly Wiglesworth and Susan Hawk. The tiebreaker question was "What was Sonja's last name?" Susan did not know, while Kelly correctly answered "Christopher" and won immunity.

In The Australian Outback, the challenge was used as the Final Immunity Challenge, in which Colby Donaldson narrowly won over Tina Wesson.

In Africa, this was used as the final four Immunity Challenge. Tom Buchanan initially had the lead, but Kim Johnson and Lex van den Berghe caught up. The final question was "Which contestant had no piercings, including their ears?" Tom incorrectly answered Jessie Camacho, Kim J. answered Kelly Goldsmith, while Lex answered Lindsey Richter. Kim J. was awarded the point and won immunity.

In Marquesas, this was used as the final four Immunity Challenge. Everyone was relatively even. However, Vecepia Towery won when she correctly answered the question, "What branch of the military did John train to be a registered nurse?" She answered the Air Force, whilst the others answered the Army, thus giving her immunity.

In San Juan del Sur, the challenge was for individual reward and was conducted in a manner similar to Q and A, except with questions about castaways who were in the game post-merge. In each round, everyone who answered the question correctly would get to chop a section of another person's rope. Once a rope was chopped three times, a large rock would drop on a skull and that player would be out of the challenge. The majority Fab Five alliance of Baylor Wilson, Jaclyn Schultz, Jon Misch, Missy Payne, and Natalie Anderson immediately targeted the minority alliance of Reed Kelly, Alec Christy, and Keith Nale and systematically eliminated all three of them by the end of the first two questions. After the second question, it became apparent that the remaining five were planning to manipulate the game to ensure that Missy would win. As a result, rather than waste time conducting the challenge, host Jeff Probst ended the challenge and announced Missy as the winner. 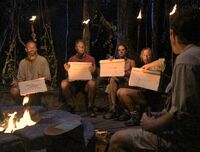 The final four of Borneo compete.

Tina and Keith at the Final Immunity Challenge of The Australian Outback. 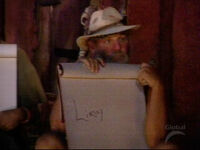 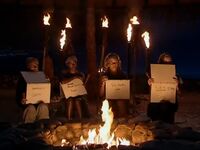 The final four compete in Marquesas.