Survivor Wiki
Register
Don't have an account?
Sign In
Advertisement
in: Gameplay, Survivor (U.S.), Survivor: The Australian Outback,
and 9 more

The Australian Outback
Panama
Micronesia
Tocantins
Samoa
One World
Caramoan
Cambodia
Kaôh Rōng
David vs. Goliath
Evacuations (often called Medevacs when referring to medical evacuations) are rare instances wherein an emergency forces a contestant to be removed from the game without being voted out. For a medical evacuation to occur, the medical staff will be called in to assess the contestant's condition and decide whether or not they are fit to continue in the game. The specific deciding term for a medical evacuation to occur is "life-threatening". When a contestant must be evacuated, there are three modes of transportation at the Production Crew's disposal, a boat if the season is set on an island, a truck if the season is set on land, and in extreme circumstances a helicopter is present when time is a crucial factor in protecting a contestant's safety.

A contestant can also be removed from the game and sent back home in case of an emergency situation occurring in their family with their presence being needed, as happened to Terry Deitz in Survivor: Cambodia.

The first medical evacuation occurred in Survivor: The Australian Outback. Michael Skupin fell into the campfire at Kucha, severely burning his hands. He dove into the river to quell the pain. He was evacuated by helicopter. Ogakor was informed of the accident, via a Tree Mail message which explained why an Immunity Challenge would not occur on Day 18.

In Survivor: Panama, Bruce Kanegai complained of increasing stomach pain for several days. Claiming he had not been able to go to the toilet since visiting a Panamanian village on reward several days earlier, he requested an examination by the medical staff. They pulled him from the game, though he returned to participate as a member of the jury.

Survivor: Micronesia was the first season to feature multiple - in this case, two - medical evacuations. The first occurred to Jonathan Penner, who sustained a puncture wound to the knee in a Reward Challenge. Several days later, the medical team was called in to examine the injury. The wound had become seriously infected, and Jonathan was reluctantly pulled from the game. On Day 31, James Clement was examined by the team for a cut finger which had become infected. On the grounds that the infection could spread and cause severe damage to his joints, James was pulled from the game, though he continued to participate as a member of the jury.

In Survivor: Tocantins, Joe Dowdle suffered an infection in his leg, which began to prove problematic at the time of merge. Following the first individual Immunity Challenge, he was asked to remain at the challenge site while his tribemates returned to camp. When examined by the medical team, it was deemed that the infection, if not treated immediately, could spread to his bones and/or blood which would lead to amputation or death, and Joe was pulled from the game.

In Survivor: Samoa, the controversial Schmergen Brawl led to several injuries, mainly to Mike Borassi. Following the challenge, Mike was retained at the challenge site for medical evaluation, where it was deemed that he needed to be pulled from the game. Several days later, during an Immunity Challenge, Russell Swan passed out. The challenge was halted as the medical team saw to Russell, whose dehydration resulted in plummeting blood pressure. Fearing for his life, Russell was evacuated from the game.

Survivor: One World saw the first evacuation of a female contestant when Kourtney Moon injured her wrist during the first challenge. The challenge was halted, as the medical team examined Kourtney's injury. Requiring x-ray analysis, she was pulled from the challenge site. Jeff Probst informed the tribes that since the challenge required nine castaways to start and finish, Manono won by default. However, the option to continue the challenge with a nine versus eight competition was offered as a gesture of goodwill, but Manono declined, angering the Salani tribe. At Tribal Council, Salani was informed that Kourtney had been pulled from the game as her injury would require surgery. Subsequently, Colton Cumbie began to experience severe stomach pain. When he was found curled up in a ball, his tribemates called in medical, where it was deemed that he may have been suffering from appendicitis, and he would need to be evacuated from the game for further diagnosis and treatment.

In Survivor: Caramoan, Shamar Thomas got a grain of sand in his eye. Although his tribemates doubted the severity of the injury, the medical team determined that the foreign object in his eye could cause a corneal abrasion that could cause loss of sight if untreated. Shamar was pulled from the game. Later, on Day 36, Erik Reichenbach collapsed shortly after Tribal Council. The team determined that his body was giving up after taking so much punishment throughout the game. He was pulled from the competition, though he returned as a member of the jury.

In Survivor: Cambodia, Jeff Probst came to the Ta Keo camp on Night 13 to inform Terry Deitz that his son Danny was being hospitalized and that his wife and the doctor insisted him to come back home. Terry was quickly pulled from the game and flown to the U.S. to be with his son.

Survivor: Kaôh Rōng was the first season to have three medical evacuations in one season. After winning a Reward Challenge on Day 9, Caleb Reynolds collapsed due to heat stroke. After being inspected by the medical team, he was removed from the game after his temperature spiked to more than 110 degrees Fahrenheit (43.3 Celsius). Other contestants, Cydney Gillon and Debbie Wanner, also collapsed, but were treated effectively and cleared to remain in the game. All three collapses happened after the challenge's completion. After many contestants reported having injuries, Jeff brought a doctor to camp later in the day. After assessing Neal Gottlieb's multiple staph infections, the doctor decided it was too dangerous and pulled Neal from the game, but he became the first member of the jury. Finally, after a reward on Day 34, Joe del Campo came back to camp with pain in his bladder. He called in the medical team, and they gave him a day to see if the administered treatment proved effective. When that did not work, he was pulled from the game, becoming the seventh member of the jury.

Five seasons later, in Survivor: David vs. Goliath, the David tribe was returning to their camp via a boat following their loss at the inaugural Immunity Challenge. Due to the rough weather and high winds, the boat crashed against waves, causing contestant Pat Cusack to injure his back. Upon arriving at the nearest beach, Joe Rowles concluded that Pat's back injury was too severe for him to continue, and promptly removed him from the game.

Probst defended evacuated player Caleb Reynolds' inclusion in Survivor: Game Changers, saying his evacuation was a result of him pushing his body to the limit for the game, which made him a game changer.[1]

Michael is evacuated. (The Australian Outback) 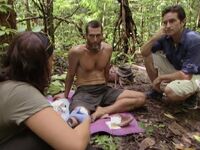 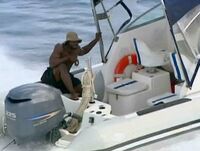 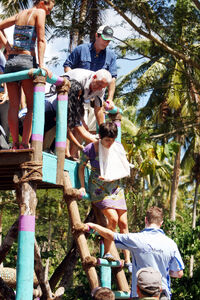 Kourtney is evacuated. (One World) 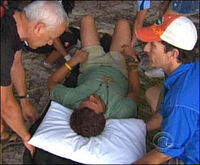 Colton is evacuated. (One World)

Terry is evacuated to be with his son. (Cambodia)

Pat is evacuated. (David vs. Goliath)