Enil Edam is the merged tribe of Bikal and Gota from Survivor: Caramoan. Their tribe color is green.

After a pre- and post-switch that resulted in six of the ten Fans be eliminated, the Favorites entered the merge with not only the advantage of having played before but also a numerical advantage. However, Corinne Kaplan had enough of working with Phillip Sheppard, so she and Malcolm Freberg came up with a plan to recruit Erik Reichenbach and the other remaining Fans to form a new majority. Worried about Corinne's allegiance, Phillip, Andrea Boehlke, Dawn Meehan, and John Cochran shored up relationships with previous outsiders Erik and Brenda Lowe. After Cochran won immunity, Corinne and Malcolm tried to play the first vote safe and vote out Sherri Biethman. After being approached by Corinne to join her alliance, Dawn warned the rest of Stealth R Us that Corinne would target Phillip after Sherri went in this vote. Stealth R Us then used Sherri to vote out Corinne. After a last-minute decision by Andrea to switch the subsequent target to Michael Snow and avoiding Reynold Toepfer's Hidden Immunity Idol, it looked like the majority alliance of seven would systematically eliminate the remnants of Corinne's alliance, the Three Amigos. However, on Day 28, Reynold won immunity, Malcolm found a second idol and he used both of his idols to protect himself and Eddie Fox from the vote. A chaotic Tribal Council resulted in the Three Amigos getting their desired target out, Phillip, with only Erik voting against the Stealth R Us alliance.

With all of their idols gone, and one last failed attempt to convince Erik and Sherri to flip, the status quo resumed for a few more votes sending Malcolm and Reynold to the jury. However, Andrea then identified Brenda as a threat. Andrea also became a threat by finding a Hidden Immunity Idol. This lead Eddie to be ignored as a main target for the following vote as Andrea launched a plan to vote out Brenda, but the rest of the tribe split the votes against Andrea and Eddie which resulted in Andrea's vote out with an idol in her possession. Cochran and Dawn would pass up on another opportunity to vote out Eddie after Brenda's Reward Challenge win made her the most likely person to win the jury vote from their perspective. Eddie wasted his vote on Erik, which allowed Cochran, Dawn, and Sherri to blindside Brenda 3-2-1 on Day 36. An unexpected evacuation of Erik moments after Tribal Council lead to the final four occurring on Day 37. Cochran won the final Reward and Immunity Challenges, and Eddie was finally voted out on Day 38.

At Final Tribal Council, most of the jury ignored Sherri. Sherri did not do herself justice either by mentioning her wealth in her opening statement and getting defensive in response to Erik's jury statement. The jury vacillated between Cochran and Dawn but was mostly critical of Dawn due to her emotional volatility. Brenda went as far as forcing Dawn to remove her teeth as payback for her betrayal. Ultimately the jury respected Cochran's gameplay the most and rewarded him with an 8-0-0 jury vote and the title of Sole Survivor.

The new Bikal tribe, as the new Gota tribe arrives for the merge.

The tribe flag is planted.

The castaways prepare to compete in their first post-merge Reward Challenge, Jump Shot.

The castaways compete for immunity in Last Gasp.

The final eleven at Tribal Council.

The final ten prepare to compete in Muddy Waters for reward.

The final ten at Tribal Council.

The tribe competes in Drop A Log for immunity.

The castaways compete for immunity and a clue to the Hidden Immunity Idol in Bermuda Triangle. 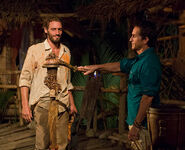 The final six anticipate the Loved Ones Challenge.

The castaways hold on for immunity.

The final six at a fateful Tribal Council.

The final four partake in the Rites of Passage.

The jury of Survivor: Caramoan.

The Final Three of Survivor: Caramoan.

Cochran is the Sole Survivor of Survivor: Caramoan.