End of the Line

End of the Line

Borneo
The Australian Outback
End of the Line is a recurring sprint challenge that contestants run through a rope course while attached to the rope with carabiners.

Castaways must sprint along a trail of ropes and must find a series of checkpoints. Along the way, they would come to a junction. To get past, they must place another carabiner on the other part of the rope then unclip the first. Castaways must cling on to the carabiner at all times. At each checkpoint, there are several ropes that lead to the next checkpoint. Otherwise, there are also several ropes that lead to dead ends. If that happens, they must backtrack to their last checkpoint and start over. The first person to reach the end of the trail wins.

The challenge first appeared in Survivor: Borneo where it appeared as the second Individual Immunity Challenge. Gervase Peterson won the challenge, winning immunity.

The challenge re-appeared one season later in Survivor: The Australian Outback, but this time it appeared as a Reward Challenge. Colby Donaldson won the challenge, winning a horseback ride, food, Budweiser, and an overnight stay on a cot, followed by breakfast at an Outback cowboy camp.

Gervase at the challenge in Borneo. 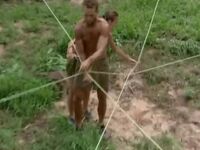 Colby and Amber at the challenge in The Australian Outback.