The challenge accommodates two to four contestants in an individual challenge. The winner(s) of the challenge remain at Redemption Island to await their next duel, or at certain points (immediately prior to a merge or before the final five Immunity Challenge), re-enter the game. The losing contestant(s) are permanently eliminated from the game, represented by the burning of their buff as they exit Redemption Island Arena.

In seasons featuring duels, Reward Challenges tend not to occur, being replaced by duels in the running time of an episode for brevity purposes, or are combined with Immunity Challenges.

At Redemption Island, duels determine who would stay on the island and who would be permanently eliminated. On the day of each duel, the castaways would receive Tree Mail instructing them to proceed to Redemption Island Arena, a special challenge area where all of the duels take place.

Upon reaching the arena, they will be welcomed by the host. Also in the arena are selected players from the competing tribes who are there to watch the duel. After the duel, it is up to the observers to decide if they will spoil the goings-on at the arena, or stretch the truth. In Blood vs. Water, all members of both tribes were in attendance due to the switch-out twist, and after the first re-entry point (the merge) of each respective season, the entire tribe attends each duel.

Unlike other times when tribes convene to meet with host Jeff Probst, players on Redemption Island line up in a particular order, typically with the most recent eliminated on the right whilst the current champion(s) are to the left. In Redemption Island and South Pacific, the challenge props were colored in greyscale, while in Blood vs. Water, they were comprised of three colors: blue indicating the longest serving duelist, red for second longest duelist, and yellow for the newest duelist.

In this special challenge, the winner(s) of the duel will stay on Redemption Island and continue their pursuit for the title of Sole Survivor, while the loser(s) will be permanently eliminated from the game (this is denoted by the loser tossing his/her buff in a fire wok). Theoretically, should the first person voted out make it to the re-entering stage, he/she must win all succeeding duels, meaning the castaway must defeat all subsequent castaways sent in the island.

Matt and Stephanie compete in Concentration.

Matt and Sarita compete to re-enter the game in the final pre-merge duel, Chimney Sweeps.

Matt, Mike, and David compete in the first three-person and first post-merge duel, House of Cards.

Matt, Mike, and Julie compete in Survivor Shuffle Board.

With Grant and Matt eliminated, Mike and Andrea compete to re-enter the game in the final duel, A Leg Up.

Semhar and Christine compete in the first duel, Over-Extended.

Christine and Mark compete in Sandbagging. 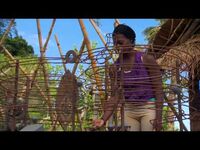 Stacey loses to Christine in Simmotion.

Christine and Elyse compete in Lost in the Shuffle.

Christine and Mikayla compete in Game of Bridge.

Christine loses to Ozzy for a chance to re-enter the game in the final pre-merge duel, Jail Break.

Keith, Ozzy, and Jim compete in the first post-merge duel, Keep It Up.

Ozzy, Dawn, and Whitney compete in Offer It Up.

Ozzy and Edna compete in Block It Out.

Ozzy and Brandon compete to re-enter the game in the final duel, Get a Grip.

Rupert loses to Candice and Marissa in the first duel, Operation Balance Build.

Candice loses to John and Brad in A Game of Bridge.

John, Brad, and Laura M. compete in A Numbers Game.

John, Laura M., and Kat compete in Build a Fire.

John, Laura M., and Laura B. compete to re-enter the game in the final pre-merge duel, Get a Grip.

Vytas, Tina, and Laura M. compete in Block It Out.

Tina, Laura M., and Caleb compete in House of Cards.

Tina, Laura M., and Hayden compete to re-enter the game in the final post-merge duel, A Leg Up.