Merged with Sele and Yara on Day 19

Dakal is a tribe from Survivor: Winners at War.

Dakal entered the game with luck on their side by being the stronger of the two tribes in challenges, and having high morale at camp. Underneath the happy surface, several different groups were formed, such as the alliance of one-time players, and the return of Cops-R-Us. After the tribe switch, Dakal kept their majority over Sele members, but despite that, a major blindside occurred the one night they went to Tribal Council during that phase. Their tribe color is red.

Twenty previous winners returned to the game and landed on a small beach dune with Jeff Probst waiting for them. After explaining the rules of this season such as Edge of Extinction, Fire Tokens, and the two million dollar grand prize, Jeff split the twenty into two different tribes with Dakal consisting of Amber Mariano, Sandra Diaz-Twine, Wendell Holland, Tony Vlachos, Sarah Lacina, Sophie Clarke, Yul Kwon, Tyson Apostol, Kim Spradlin-Wolfe, and Nick Wilson. Immediately afterwards, Jeff announced that both tribes would compete in the first Immunity Challenge on Day 1. Dakal easily beat Sele 3-1, winning both immunity and flint.

Upon arriving at camp, they found the Fire Token menu explaining how much items such as comfort or advantages cost. Sandra and Tony made amends after what happened in Game Changers, and brought along Sarah in their little group. Meanwhile, Yul, who had not played since Cook Islands, rounded up an alliance of one-time players which included Sophie, Nick, and Wendell. Yul's main targets were Amber, Tyson, and Kim as he recalled the latter two, Jeremy, and Rob playing in a televised poker game and how Tyson brought up the possibility of a power alliance if all four played together. Sandra herself expressed frustration over Rob not telling her he would compete again during their time on Island of the Idols, and expressed interest in voting out Amber.

In the second Immunity Challenge, Dakal had a big lead, but lost it when Wendell struggled on the ring toss portion. That led Sele to catch up to them and take the victory. Facing Tribal Council, Sandra found a Hidden Immunity Idol in her bag, and realized that Natalie Anderson sent it to her from the Edge of Extinction. She ended up buying the idol at the cost of her Fire Token. Afterwards, the alliances began to take shots at each other as Amber and Kim tried to target Nick for being the most recent winner, while Tony deemed Tyson a dangerous player after the latter wanted to vote him out. In the end, the majority stuck to the original plan and voted Amber off 6-3-1. Before leaving for the Edge, Amber willed her Fire Token to Rob Mariano.

Over the next few days, a unique tribe dynamic emerged as Kim felt alienated from the majority, compared to her time in One World. However, she would find a Hidden Immunity Idol that needed to be shared with somebody, and decided to split it with Sophie. Tony and Sarah restarted their Cops-R-Us alliance from Cagayan, this time promising not to backstab each other. In one situation, Sarah was willed an opportunity to sneak into Sele's camp and claim a Vote Steal advantage at the cost of her Fire Token. Thanks to Tony's help, Sarah was successful. In addition, Tony started to play a calmer game, while Sandra tried to make the most of her situation as she planned to make this her final run. This dynamic allowed Dakal to win the next two Immunity Challenges and a few rewards.

While morale on the tribe was high, tensions began to rise as Tyson tried to raise some numbers up and take out Sandra. However, a conflicted Yul told Sandra about it, much to her anger. In addition, Tyson began to suspect Yul's alliance and how the latter was targeting the people with past connections, but his attempts to warn the rest fell on deaf ears. In the fourth Immunity Challenge, Dakal had the lead again, but Nick and Sarah blew it on the puzzle, allowing Rob and Michele Fitzgerald from Sele to catch up, losing their second challenge yet. Tyson began to target Nick as the latter struggled on a puzzle he won at on David vs. Goliath, but the rest of the tribe considered getting Tyson out. However, Tony was hesitant on that as he wanted to keep Tyson as a possible shield, but while Kim and Sarah were up to that idea, Sandra was not as Tyson was too dangerous. At Tribal Council, the majority stuck to the original plan and voted off Tyson 7-1-1. Even though he tried to target Nick out, Tyson bequeathed his Fire Token to the former.

On Day 12, both tribes returned to the marooning location where a Tribe Expansion took place. The new Dakal featured Kim, Tony, and Sandra, along with former Sele members Denise Stapley and Jeremy Collins. Although the two former Sele members were in the minority, Denise and Jeremy sought to bond with Kim, seeing her as the loner of the original Dakal. However, Tony wanted to keep the original tribal lines strong and tried to keep Kim on his and Sandra's side. Nothing would come though as Dakal came in second in the next Immunity Challenge.

On Day 16, it was revealed that the Immunity Challenge was a winner-takes-all, with the two losing tribes going to a Double Tribal Council. Dakal struggled in the Immunity Challenge, and lost to Yara. Returning to camp, Tony began to grow paranoid after seeing Rob voted out, and retreated to build another spy shack, disappearing for most of the day. Knowing she could be going home if the tribal lines were strong, Denise tried to solidify a women's alliance between Sandra and Kim. When Tony came back, he approached to the rest of the tribe about keeping the strong players around and taking out Denise. However, Sandra grew skeptical about that idea, and knowing that her Hidden Immunity Idol only had one more night of usage, approached Denise about trading it for two Fire Tokens if she voted for either Jeremy or Tony. Denise agreed, but negotiated that she would pay Sandra one Fire Token now and pay her the other one when they get back to camp. At Tribal Council, talk about original tribal lines continued, and before the votes were read, Denise played Sandra's idol to protect herself. Then, to everyone's surprise, she also played her own Hidden Immunity Idol for Jeremy. When the votes were read, the four votes for Denise were voided, but in a shocking move, Denise put her vote against Sandra, blindsiding the two-time winner 1-0. Sandra bequeathed her new Fire Token to Yul, but upon landing on the Edge, she decided to raise the mast as she felt she had no chance of re-entering the game.

After Sandra's blindside, Kim considered aligning with Jeremy and Denise so they could get out Tony the next time they lose immunity. However, that never came to be as Dakal placed second in the next Immunity Challenge. On Day 19, the three tribes merged.

Tony and Wendell compete for Dakal in the opening Reward/Immunity Challenge, By Any Means Necessary.

Dakal at their first Tribal Council.

Dakal competes in the Reward/Immunity Challenge, Along the Watch Tower.

Dakal before the Tribe Expansion.

Dakal at their third Tribal Council. 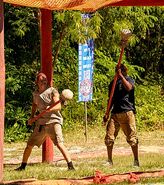