The castaways would race to retrieve puzzle pieces and then assemble them into a cube. The first castaway to assemble the cube would win.

In Survivor: Ghost Island, the challenge was modified to be a tribal challenge. The tribes had to complete an obstacle course before retrieving massive puzzle pieces, which would be lugged with a sled to the puzzle station before the cube could be assembled.

In Thailand, when the castaways gathered for the Immunity Challenge, host Jeff Probst announced that the contestants would compete as a team with their loved ones. In the end, Ted Rogers, Jr. and his brother Aljuwan won, giving Ted immunity.

It was used as the first Immunity Challenge in Ghost Island, where tribes would have to complete an obstacle course and transport two sets of three pieces using a sled before the cube could be assembled. Naviti took the lead during the sled-pulling portion and went on to win, sending Malolo to Tribal Council. 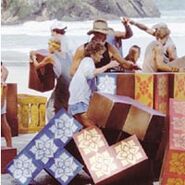 The castaways and their loved ones competing in Thailand.

The tribes compete in Ghost Island.