Chuay Gahn was the older, weaker tribe, but due to an overall lack of physical challenges during the pre-merge phase and a delayed merge, they barely managed to overcome their younger Sook Jai rivals and enter the merge with greater numbers. Their tribe color is orange. 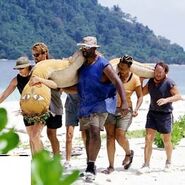 Chuay Gahn at the auction

Retrieved from "https://survivor.fandom.com/wiki/Chuay_Gahn?oldid=296094"
Community content is available under CC-BY-SA unless otherwise noted.