Borneo
The Amazon
All-Stars
Fiji
Samoa
Choose Your Weapon (also known as Weapons, Warrior's Choice, and Spear Me the Details) is a recurring challenge that originated in Survivor: Borneo, and later appeared in The Amazon, All-Stars, Fiji, and Samoa. The challenge sees contestants attempt to master local weapons such as blow-darts, spears, and the bow and arrow.

The challenge is played in rounds, with the winners of each round moving on to the next. Each round, every contestant will attempt to hit a target using some form of local tribal weapon. The closest contestants to the target advance to the next stage of the challenge, where the process is repeated until one contestant is left standing.

The challenge debuted in Survivor: Borneo as a tribal Reward Challenge. Three members of each tribe competed, using one weapon each. The tribe to win two out of three rounds would win the challenge. Sean Kenniff beat Jenna Lewis using a blowdart gun to knock fruit off a wall (with the heaviest amount of fruit dislodged scoring a point) in the first round, scoring a point for Tagi. Subsequently, using a slingshot to knock down fruit, Gretchen Cordy outdid Richard Hatch to score for Pagong. In the last round, throwing spears at a target, Susan Hawk fell inches short of Joel Klug's mark. This resulted in Pagong winning the challenge 2-1, and receiving the fresh fruit knocked down during the challenge, as well as three chickens.

In Survivor: The Amazon, the challenge was used for individual reward. The challenge consisted of three rounds. The four closest shots using a blowdart moved onto throwing spears. The two best shots then took aim with a bow and arrow. Alex Bell defeated Matthew von Ertfelda in the final round to win the challenge and an afternoon at a coffee bar.

In Survivor: Fiji the challenge was used for tribal immunity. Each contestant competed in three rounds (blowdarts, spear, bow and arrow), with the person who hits closest to the target scoring 1, 2, or 3 points for their tribe respectively. Led by Yau-Man Chan, Moto won the challenge, and immunity.

Survivor: Samoa saw the challenge used for individual immunity. Each castaway would throw one stone at a set of three hanging tiles. For each tile broken, they would earn one spear to be used in the next round. The castaways would use a crossbow to shoot the spears they earned at a target. The castaway that shoots their spear closest to the center of the target would win. Mick Trimming won the challenge, and immunity. 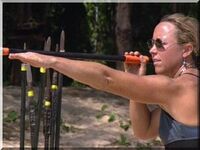 Sue throws a spear in Borneo.

Matthew in the challenge in The Amazon. 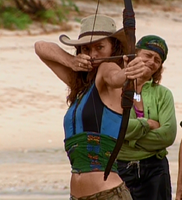 Lisi at the challenge in Fiji.