Played in a series of rounds, the host will show the castaways a list of symbols or colors. When the host has finished, the castaways must show the same symbols/colors that were presented to them in the order that was previously shown. Showing the wrong symbol would result in the castaway being eliminated from the challenge. The last contestant remaining would win.

In Survivor: China, prior to the challenge, players that did not want to participate were able to partake in a feast of cheeseburgers, french fries, and drinks for as long as the challenge continued, or until the food runs out, whichever occurred sooner. Todd, Denise, Courtney, and James accepted the offer and sat out. At the challenge, Jeff called out to the castaways a series of Chinese zodiac animals. Then, the contestants must each stab the corresponding symbols with a knife on a solving board in the correct order. Get one symbol wrong and they're out. Last one remaining wins. Erik was first out, followed by Amanda. Frosti answered the final question incorrectly and Peih-Gee won immunity.

In Survivor: Nicaragua, Jeff shown a series of symbols that the castaways should show back in order. Brenda was the last one left and won immunity.

It reappeared as the first individual Immunity Challenge in Survivor: Blood vs. Water right after the tribes merged into Kasama. Vytas Baskauskas outlasted his brother Aras to win immunity.

In Survivor: Cagayan, the challenge was used for immunity. This time the castaways were shown a series of colored tiles, which they then had to repeat back to Jeff. It eventually came down to Tasha Fox, LJ McKanas, and Tony Vlachos. Tasha had the correct tile, giving her the win.

In Survivor: San Juan del Sur, the challenge was again used for immunity. The contestants were shown a series of symbols on a cube and had to replicate the symbols. Jeremy Collins outlasted everyone else to win immunity. 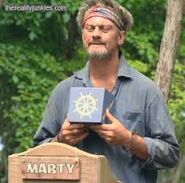 The castaways during the challenge in Redemption Island.

Tina at the challenge in Blood vs. Water.

Jefra, LJ, and Tasha reciting their answers in Cagayan.

The challenge in San Juan del Sur.
Add a photo to this gallery

Retrieved from "https://survivor.fandom.com/wiki/Chinese_Zodiac_Symbols?oldid=552859"
Community content is available under CC-BY-SA unless otherwise noted.