Chaboga Mogo is the merged tribe of Chapera and Mogo Mogo from Survivor: All-Stars.

Characterized by the divide between the Day 13 incarnations of Chapera and Mogo Mogo, the latter found themselves outnumbered and were systematically voted out by the former. Their tribe color is blue.

On Day 26, Chapera and Mogo Mogo arrived at Saboga beach. They were given blue Buffs and told that the tribes had merged into one, and that they would be making their home on the new beach. The members collectively chose the name by merging the original names into one.

Sparks flew immediately as Rob Mariano continued to string along Lex van den Berghe and Kathy Vavrick-O'Brien by making them believe that the deal he had made with them after the Day 24 Immunity Challenge was still valid. However, he was eventually forced to renege on the deal, leaving Kathy and Lex feeling betrayed and heartbroken.

Both Rob and Kathy won immunity after a surprise twist allowed one member of each gender to win an Immunity Necklace. Kathy contemplated relinquishing her immunity to Lex at Tribal Council, but eventually reconsidered and kept it for herself. Lex was voted out of the game by the Chapera Alliance and his former ally Shii Ann Huang in a 7-2 vote.

Day 28 saw a challenge that combined a "letters from home" reward with immunity. The team of Alicia Calaway, Amber Brkich, Rob, and Shii Ann won letters from their loved ones. Rob went on to win the individual portion of the challenge, granting him immunity and the chance to view a videotape from his brother, Mike. Rob forfeited his chance to see the tape in order to grant letters to everyone, a move that was viewed with equal parts admiration and suspicion by his fellow castaways.

With their backs against the wall, Kathy and Shii Ann attempted to swing Alicia and Tom Buchanan to their cause. It was to no avail, and Kathy was voted out 6-2 at Tribal Council, leaving Shii Ann as the only original Mogo Mogo left in the game.

Rupert Boneham won the next Reward Challenge, a survey that revealed the tribe's opinions of one another and left Alicia with hurt feelings. This gave Rupert the opportunity to select which tribe members would receive which rewards. By doing this, Rupert inadvertently revealed the pecking order, giving himself, Rob, Jenna Lewis, and Amber the most extravagant meals and leaving Tom and Shii Ann with cold potatoes and rice, respectively.

Chapera's total domination was foiled when Shii Ann unexpectedly won an endurance Immunity Challenge, leaving the tribe to cannibalize one of their own. At this point, several possibilities were discussed, including voting out Rupert—who had alienated those outside his alliance with his Reward Challenge win—and Rob, who had been dominating the game mentally and physically. They ultimately chose outsider Alicia, who was dismissed unanimously on Day 30.

On Day 31, the castaways' loved ones appeared to compete in a gross food challenge. Tom's son Bucky Bo won the challenge, and the pair chose Rob and his brother, Mike, to join them at the old Chapera camp for a night of drinking and carousing. During this time, Shii Ann attempted to turn the tide in her favor, to no avail. Tom won the next immunity, and Shii Ann was eliminated 5-1 on Day 33.

With no more members of the Mogo Mogo Alliance left to delay the process, the final five was comprised entirely of the post-dissolve Chapera. At this point, Rupert and Jenna contemplated turning on the Rob-Amber power alliance that had thus far dictated the course of the game. These feelings of discontent were intensified when Rob won a vehicle in a Reward Challenge and selected Amber to join him on the reward trip—at which point she, too, won a car. In order to prevent the impending betrayal, Rob instigated a fight between Rupert and Tom, so that the two would not think to align. The move proved successful: after Amber threw a word search challenge in order to give Rob immunity, Rupert and Jenna stayed true to their alliance with Rob and Amber. A betrayed Tom was eliminated 4-1.

The final four, in spite of being largely amicable toward one another, was clearly divided between the two dead alliances: Rob and Amber were as solid as ever, and Jenna and Rupert had maintained their alliance in spite of some friction over the past several days. When Amber won the Immunity Challenge, the former alliance got the upper hand over the latter, and Rob and Amber attempted to pressure Jenna into betraying her ally rather than having a rock-pulling tiebreaker. This move proved successful, and Jenna joined the couple in voting out Rupert on Day 37.

The next day, the final three completed their Rites of Passage before competing in the Final Immunity Challenge. Jenna was quickly eliminated when she moved her foot, and despite a brief moment of mistrust between Rob and Amber, Rob eventually won his third immunity. He voted Jenna out of the game on Day 38.

Rob and Amber spent their last day on the island enjoying one another's company before heading to the Final Tribal Council. The jury proved to be a particularly harsh batch, with Lex, Kathy, Alicia, and Tom all nursing hurt feelings over Rob's betrayal of them.

Months later, Rob would go on to propose to Amber, which the latter accepted. Ultimately, Amber won Survivor: All-Stars in a 4-3 vote. 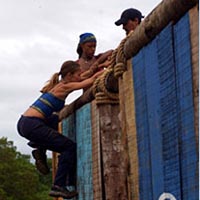 Chaboga Mogo competes in the Reward Challenge, Face Off.

Chaboga Mogo competes in the Final Immunity Challenge, Hands on a Hard Idol.

Rob M. and Amber at the Final Tribal Council. 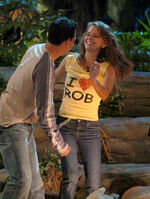 Amber is the Sole Survivor of Survivor: All-Stars.