Vanuatu
Fiji
One World
By the Numbers is a recurring challenge involving delicate balance in Survivor.

The members of each tribe line up on a very narrow balance beam. One tribe member at a time, they must move across the beam and around the other tribe members. The person crossing can only touch one member at a time. If two people touch at once or a member falls into the water, they must start all over. Once a member reaches the platform, the next person may proceed. The tribe who gets all their members across first wins.

The challenge was first used in Survivor: Vanuatu, for reward. The Yasur tribe was easily able to defeat the Lopevi tribe and win the challenge, earning themselves blankets and pillows.

In Survivor: Fiji, Moto and Ravu competed in this challenge for reward. Despite originally trailing, Moto developed a strategy which involved having the member kneel down, allowing them to cross with relative ease. This would allow Moto to pull off a victory and earn fish, rice, spices, and a king-sized bed with sheets, pillows, and blankets. This is the only season where the challenge was administered to tribes with both male and female members.

The next time the challenge was used was in Survivor: One World for immunity. While the Manono tribe made decent progress, the Salani tribe had communication problems early on, which were aggravated by Kat Edorsson unnecessarily jumping into the water. By the time Monica Culpepper was able to come up with a plan to get the women across, the Manono tribe won immunity. 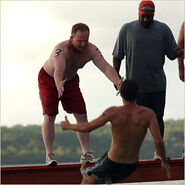 Travis and John K. having a hard time (Vanuatu).

Ravu trying the challenge in Fiji.

The challenge as seen in One World.
Add a photo to this gallery

Retrieved from "https://survivor.fandom.com/wiki/By_the_Numbers?oldid=584752"
Community content is available under CC-BY-SA unless otherwise noted.