By Any Means Necessary

Palau
Panama
Micronesia
Heroes vs. Villains
Caramoan
Millennials vs. Gen X
Ghost Island
Winners at War
By Any Means Necessary (also known as Battle Dig, Beach Bash, and Water Slaughter) is a physical race challenge that originated in Survivor: Palau, and has subsequently appeared in Micronesia, Caramoan, Millennials vs. Gen X, Ghost Island, and Winners at War. A land-based version of the challenge was also used in Panama and Heroes vs. Villains.

In Palau, Caramoan, Millennials vs. Gen X, Ghost Island, and Winners at War, members of each tribe would race out in the water to retrieve a ring. The tribe members would then battle against each other to gain possession of the ring and bring it to their tribe's finishing station. The first tribe to score a given number of points wins.

In Panama and Heroes vs. Villains, members for each tribe will race out to a marked location and dig up a bag. The castaways then compete to return the bag to their tribe's mat. The first person to touch the tribe mat, with a hand on the bag, scores a point for their team. The first tribe to win a given number of rounds wins the challenge.

In Micronesia, the tribes start at opposite ends of the playing field with three canvas bags. The tribes have to battle their way to their end zone. The tribe that has their three bags and two of the other tribe's bags in their end zone at the same time wins.

Castaways are allowed to use any means to attempt to stop the opposing tribe from scoring a point other than punching, choking, or otherwise intentionally physically hurting each other. From the challenge's debut until Caramoan, men and women were allowed to compete against each other. Beginning with Millennials vs. Gen X, rounds are now restricted to all-male or all-female matchups.

The challenge debuted in Palau as a Reward Challenge. Castaways from each tribe would swim out to retrieve a ring and try to bring it back to their tribe's pontoon while the other tribe would try to stop them by any means other than punching or otherwise intentionally physically hurting each other. Ulong used its superior physical strength over Koror to win in a 3-0 sweep.

The challenge re-appeared in Panama as a tribal Immunity Challenge. In teams of two or three, castaways would have to race out and dig out a big buried underneath the sand and bring it back to their tribe's mat. In a highly contested challenge between both tribes, Casaya beat out La Mina 3-2 to win immunity, sending La Mina to their first Tribal Council.

In Micronesia, the challenge was used as a Reward Challenge. Playing in an area similar to a football field, the tribes started at opposite ends of the field with three canvas bags. The tribes would have to battle their way to their end zone with all three of their three bags and two of the other tribe's bags at the same time. In a physical battle in the rain, Malakal won the challenge over Airai.

The challenge was used as the first Reward Challenge in Heroes vs. Villains immediately at the start of the game. Similarly to Panama, castaways raced in pairs to dig a bag out of the sand and bring it back to their tribe's mat. In a challenge marred by several injuries to the Heroes and the tactics of the Villains, the Heroes managed to win the challenge, defeating the Villains 3-2.

In Caramoan, a variation of this challenge was again used as the first Reward Challenge of the season right after the marooning. Adapted to an aquatic playing field, one man and one woman from each tribe would race to retrieve a ring from one end of the course and return it to their tribe's flagpole. Bikal won the challenge 4-1 over Gota to win reward.

In Ghost Island, the challenge was used as a Reward Challenge. Again played in the water, two members of each tribe would race to retrieve a ring from one end of the course and return it to their tribe's flagpole. Naviti defeated Malolo 3-1 to win reward.

The challenge was used as the first Reward/Immunity Challenge in Winners at War immediately after the marooning. Once again played in the water, two members of each tribe would race to retrieve a ring and bring it to their tribe's flagpole. Aided by large swells from the ocean during the challenge, Dakal defeated Sele 3-1 to win reward and immunity, sending Sele to the first Tribal Council of the season.

Sally and Cirie fight for the bag (Panama).

Misty and Danielle compete in Panama.

The challenge in Micronesia.

The tribes compete in Micronesia. 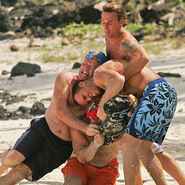 Coach and Russell face Colby and Tom (Heroes vs. Villains).

Candice and Sugar face Courtney and Sandra (Heroes vs. Villains).

Ben and Rob face Tony and Wendell (Winners at War).

Danni and Michele face Sandra and Sophie (Winners at War).
Add a photo to this gallery

Retrieved from "https://survivor.fandom.com/wiki/By_Any_Means_Necessary?oldid=556297"
Community content is available under CC-BY-SA unless otherwise noted.