Bula Bula​ is the merged tribe of Moto and Ravu​ on Survivor: Fiji.

On Day 22, the Moto and Ravu tribes paddled to Exile Island, uncertain of what to expect next. At the tower overlooking the island, the group discovered purple buffs, along with notice of a merge. The group would return to the old Moto camp. Hoping that the luxuries of the old Moto camp would remain, the ten remaining castaways were dismayed, as the camp was reduced back to how it was like on Day 1, with absolutely nothing and had no trace of the old amenities.

The group chose "Bula Bula" as the new name, and the younger women of the tribe, Michelle Yi and Stacy Kimball, painted the flag. During this time, Stacy stated her belief to Michelle that the men of the tribe would attempt to pick each other off before turning on the women. In actuality, the tribe was largely split between two groups: the Syndicate Alliance at Moto consisting of Michelle, Boo Bernis, Cassandra Franklin, Earl Cole, and Yau-Man Chan versus the members of the Four Horsemen from Ravu, Alex Angarita, Dreamz Herd, Edgardo Rivera, and Mookie Lee. In the latter group, tensions rose when Mookie revealed to Dreamz that their alliance was in possession of the Hidden Immunity Idol from the Ravu camp and that they had deliberately withheld the information from Dreamz.

A twist at the first post-merge Immunity Challenge threw all alliances off-balance when the castaways were assigned five-person teams, and were subjected to the first post-merge tribal Immunity Challenge. While the winning team would win immunity and a reward waiting back at camp, the losing team would be sent to Tribal Council immediately, without time to discuss strategy. The green team, comprised of Alex, Dreamz, Michelle, Mookie, and Stacy, lost the challenge, and were sent immediately to Tribal Council. Outnumbered, Michelle and Stacy found themselves at the mercy of the Horsemen. Alex and Mookie debated between voting out Michelle and Stacy, with Alex pushing to keep original Moto ally Stacy, and Mookie pushing to save original Ravu tribemate Michelle. Knowing that Michelle had close ties with Earl since they had been tribemates from the start, Dreamz, the swing vote, sided with Alex and Stacy, sending Michelle home, giving the Horsemen the upper hand.

The first individual Reward Challenge tested the tribe's opinions of one another and netted a landslide victory for Cassandra, who failed to fumble a single question. As the winner of a night on a luxury boat, she chose Boo, Dreamz, and Yau-Man to accompany her on the trip, and sent Mookie to Exile Island where he would later vow revenge against her. During the reward trip, Cassandra solidified her alliance with Boo and Dreamz. This led to the latter revealing the whereabouts of one of the Hidden Immunity Idols: in the pocket of Mookie.

The next Immunity Challenge, an endurance competition, was won by Yau-Man. This led to a stand-off between the Four Horsemen, who planned on voting for Earl, thinking that he had Moto's Hidden Immunity Idol, and the alliance of Boo, Earl, Cassandra, and Yau-Man, who were going to vote for Alex. Due to their mistrust of Dreamz, the Horsemen eventually tried to recruit Stacy, but the latter declined, instead preferring to side with the Syndicate Alliance after Yau-Man recruited her to their cause. Also cautious of Dreamz' double-dealings, the Four Horsemen discerned that the vote would be going to Alex, and had Mookie slip him the Hidden Immunity Idol. Dreamz saw the incident, and acted as double-agent by approaching the Syndicate Alliance and tattled to them that Alex now had the idol. Before walking away, Dreamz agreed to join the alliance in eliminating Mookie.

When Dreamz walked off from the conversation under the assumption that he and the Syndicate Alliance would vote for Mookie, the group further discussed which between Alex and Mookie should go home. Stacy suggested a simple alternative: merely vote for Edgardo instead, thereby completely defusing any power gained by playing the idol. Meanwhile, the Four Horsemen switched their target from Earl to Cassandra after Edgardo reasoned that Earl potentially playing an idol could backfire on them, and that Cassandra was a strong middle player who vied with the Horsemen for Dreamz' loyalty. That night at Tribal Council, Alex played the Hidden Immunity Idol as planned, but it was for naught as he did not receive any votes. Instead, an unsuspecting Edgardo was eliminated from the game in a blindside 5-3-1 vote.

Stung by the surprise vote, Alex and Mookie retaliated by rummaging through Yau-Man's possessions and finding the second Hidden Immunity Idol, which Yau-Man had found at the Moto camp. The pair attempted to blackmail the computer engineer into revealing his advantage; however, their tactic miserably backfired when Yau-Man revealed their treacherous nature and search of his things and turned the tribe's scorn against the two Horsemen.

The next Immunity Challenge was won by Stacy, meaning both remaining outsider members of the Four Horsemen were at risk at Tribal Council. However, spurred by Boo's fears that one of the two men had found the re-hidden Ravu Hidden Immunity Idol, the majority alliance agreed to split their vote in order to dilute the idol's power—three voted for Alex and three voted for Mookie. At Tribal Council, though, Alex surprised everyone by voting for his remaining ally, tipping the vote to a 4-3-1 majority and sending Mookie to the jury. Left alone, Alex struggled to gain footing in the tribe and turn the rest of the group against Boo. His efforts were in vain after Boo won the succeeding Immunity Challenge and Alex was unanimously voted out at the next Tribal Council.

Only the members of the six-person alliance remained, and it became every man for himself. On Day 34, the tribe competed in a Reward Challenge for a Ford F-350 truck. In spite of Dreamz' desire to win the car, the challenge ended up going to Yau-Man, who struck a precarious deal: in exchange for the truck, Dreamz promised to give the Immunity Necklace to Yau-Man should he win it at the Immunity Challenge with only four remaining players. Dreamz accepted the deal, and Yau-Man gifted him with the truck. In addition, Yau-Man sent himself to Exile Island, where he received the final clue to the newly re-hidden Ravu Immunity Idol. He gave this clue to Earl, who located the second idol with relative ease.

The next intended target was Boo, but the vote quickly shifted to Stacy when Boo won the next Immunity Challenge. Dreamz, however, realized Yau-Man's intentions when making the deal and wanted to blindside him by voting him out before the final four deal, so that he would be relieved from any guilt that would come with reneging on the deal. The cheerleading coach was successful in convincing Boo, Cassandra, and Stacy to vote against Yau-Man. At Tribal Council, however, Stacy accidentally tipped Yau-Man off by suggesting that their votes would be split. Yau-Man deduced their plan and played his Hidden Immunity Idol, negating all four votes with his name on. Stacy was eliminated with only Earl and Yau-Man's votes.

Any attempts at an encore performance of Yau-Man's elimination were quickly squashed when he won the final five Immunity Challenge, and Boo was quietly eliminated. At the same Tribal Council, Earl played his Hidden Immunity Idol without incident as it was the last time it could be played. On Day 38, the four remaining Bula Bula tribe members were shocked to learn that the next Immunity Challenge would be their last and that three players would be facing the jury instead of the traditional Final Two. The challenge concluded with Dreamz winning immunity. That afternoon, Dreamz told Cassandra and Earl to vote for Yau-Man, as he would surely get more jury votes. It proved grim foreshadowing for Yau-Man: Dreamz, now knowing that the Immunity Necklace guaranteed him a spot in the Final Three, reneged on his deal to give Yau-Man the necklace, and Earl turned on his long-time ally and joined Cassandra and Dreamz in voting Yau-Man out 3-1.

At the Final Tribal Council, Dreamz came under heavy fire for his questionable ethical strategic choices, being universally panned by the jury for betraying the Four Horsemen alliance, but received the harshest criticism for his controversial truck deal with Yau-Man. Cassandra, on the other hand, was not spared from the jury's wrath either, being lambasted for her seeming unpreparedness for the game and overall pretentious demeanor during the entire course of the game. Earl was also chastised for voting Yau-Man out, though he rebutted that his closest ally would have won if he had brought him to the Final Three.

In the end, Earl's strategic brilliance while hurting the least number of people earned him the title of Sole Survivor, garnering all nine jury votes.

Michelle voted out during the tribal format twist. 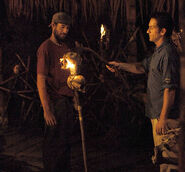 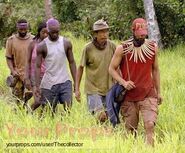 The final five head to an Immunity Challenge. 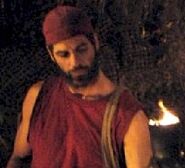 Earl, Cassandra, and Dreamz in the Final Three.

Earl is the unanimous Sole Survivor of Survivor: Fiji.