In this challenge, castaways must eat a variety of native, usually gross foods. This challenge has appeared multiple times throughout the Survivor series. In Pearl Islands and Samoa, instead of native delicacies, various ingredients were blended to create smoothies to be consumed.

As a tribal challenge, whoever finishes the dish first, wins a point for their respective tribe. When this challenge is used as an individual challenge, the last person to finish each dish is out, while the last player remaining wins.

In its debut in Borneo, the castaways were to eat a serving of butok or bug larvae. If a contestant refused to eat the beetle larvae, the contestant's tribe would automatically lose the challenge for the tribe. In order to break the tie, each tribes' most squeamish member faced off. Gervase Peterson of Pagong and Stacey Stillman of Tagi were pitted against each other. Stacey finished the larva first and won immunity for Tagi.

The challenge returned in The Australian Outback where a person from each tribe would compete against someone from the other. A spinning wheel determined what was to be eaten. This time, if someone refused to eat or threw up, they would lose a point for their tribe. Again, the challenge ended in a tie. Kimmi Kappenberg of Kucha and Tina Wesson of Ogakor were chosen for the tiebreaker, and Kimmi won for Kucha by eating a mangrove worm first.

Another variation of this challenge appeared in Africa where castaways had to drink a shot of cow's blood. During the early rounds of the challenge, milk was added to the blood to make it more appetizing. This challenge ended in a tie, in which Kelly Goldsmith of Boran and Linda Spencer of Samburu had to drink a full glass of pure cow blood. Linda finished first and won for Samburu.

The challenge again appeared in Marquesas. Tribe members had to eat farfaru (sunbathed fermented fish). This challenge ended in a tie, so Rob Mariano of Maraamu and Neleh Dennis of Rotu had to compete against each other in the tiebreaker. Rob threw some of it up, while Neleh finished first and won for Rotu.

The first time that it was used in the post-merge phrase was in Thailand, it was used as the family visit challenge where the last loved one standing won. Helen Glover's husband Jim won over Jake Billingsley's wife Jenny. At the final four Immunity Challenge, the final round was a tarantula-eating contest which was won by Brian Heidik.

In The Amazon, it was used as an individual Immunity Challenge where the last two people in each round were eliminated. Ultimately, Matthew von Ertfelda won over Deena Bennett in the final round to win immunity.

In Pearl Islands, the tribes faced off by individually competing against each other in a smoothie drinking challenge, where several exotic food items were mixed into a single disgusting concoction. The Morgan tribe won this challenge.

The challenge was reused in All-Stars as an individual Reward Challenge, where the reward was a pizza feast with the winner's loved one to be enjoyed at the old Chapera camp. Similar to Thailand, the loved ones competed for reward. The slowest to finish a dish each round was eliminated. Tom Buchanan's son Bo won this challenge over Rob Mariano's brother Mike.

In Palau, Koror selected Tom Westman and Ian Rosenberger to compete against Ulong's last members, Bobby Jon Drinkard and Stephenie LaGrossa. The castaways had to eat balut. The first four rounds were even. The final round was a time trial, in which two castaways had to eat five balut. Tom finished his balut first, winning Koror 500 gallons of fresh water and various toiletries.

In Fiji, each castaway took turns eating Fijian delicacies in order to try to score a point for their tribe. Despite being excited to eat, due to their lack of food resources at camp, Ravu lost to Moto 5 to 2, sending Ravu to their third consecutive Tribal Council.

In China, each castaway took turns traditional Chinese dishes in order to try to score a point for their tribe. Even though James Clement of Zhan Hu hatched a plan with the Fei Long tribe to throw the challenge, Denise Martin of Fei Long struggled to down the balut, forcing James to abandon the plan, paving the way for Zhan Hu to win immunity and send Fei Long to Tribal Council.

The Samoa variation of the challenge was similar to that of Pearl Islands, with smoothies once again being made out of the exotic ingredients. The Galu tribe won, mostly due to Ashley Trainer of Foa Foa having a tough time consuming her drinks.

When the challenge returned in Caramoan, it was used for the first individual Immunity Challenge. In the end, John Cochran was able to beat Malcolm Freberg and win himself immunity.

In Blood vs. Water, the challenge ultimately came down to Gervase Peterson and Monica Culpepper in the final round. As in Borneo, Gervase again failed to eat his serving of larvae in time, giving Monica the win and immunity.

In Cambodia, each castaway took turns eating Cambodian delicacies in order to try to score a point for their tribe. First, pairs competed to eat tarantulas, water beetles, and pig snouts in successive rounds; then, one representative of each tribe competed to eat deep-fried frog, pig brain, one scorpion, and balut. Just like in her original season, Kimmi of Bayon struggled due to being vegetarian, conceding a point to Woo Hwang on the pig brain. After an extremely close match, Tasha Fox scored the winning point against her Cagayan rival Kass McQuillen, earning Bayon immunity.

In Ghost Island, the castaways battled for individual immunity. In each round, they were challenged to eat fish eyes, beetle larva, Yasawa sea slugs, and mother-of-pearl clam. In the final round, Angela Perkins beat out Michael Yerger to win immunity.

Stacey after eating a larvae (Borneo). 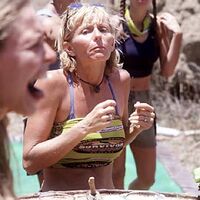 Kimmi vs. Tina at the challenge in The Australian Outback. 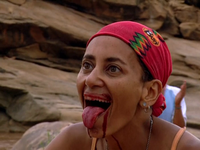 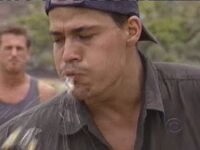 Rob is unable to eat the fafaru (Marquesas). 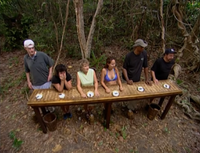 The loved ones compete in Thailand.

Jenna eating a grasshopper (The Amazon).

The loved ones competing in the challenge (All-Stars).

Tom defeats Bobby Jon in the challenge in Palau. 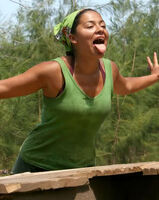 Liliana finishes her food in Fiji.

Frosti finishes his food in China.

The first round in Caramoan.

Gervase competes in Blood vs. Water.

Tasha and Kimmi face off against Spencer and Woo (Cambodia).

Michael and Angela face off in the final round in Ghost Island.