A piece of cloth symbolizing the tribe the contestant is on.

Every season
A Buff is a staple item of clothing that contestants of Survivor wear to identify which tribe they are a member of for the audience.

Buffs are tubular bandannas made from microfiber and can be worn in a variety of ways. The composition of the fabric used for the Buff allows the contestants to cool down in hot conditions and warm up in the cold (typically nighttime).

Replica Buffs can be purchased from CBS.com.

From 2009 to 2020, planetgearcompany.com was the official website to purchase Buff replicas, but due to the COVID-19 pandemic, they have opted out of selling Buffs from the Survivor franchise.[1]

Based on the motif of the season, the Buffs typically match and follow a particular design regardless of the installment. Each side of the Buff shows three logos with a strip down the crease with a local design (sharks, islands, fire, skulls, etc.).

From Nicaragua to Edge of Extinction, starting tribes began having their names on the material (with the exception of Game Changers and David vs. Goliath). Buffs used for merged tribes have never featured a tribe name, as the tribe is named by the contestants themselves. In addition, from Philippines onwards, all Buffs possess the new Buff logo.

According to the Survivor Rulebook, contestants must have their Buffs on at all times unless otherwise directed. In the event of a tribe switch or a merge, castaways are to dispose of their old Buff and wear their new one.

While they usually do not have in-game value, Buffs in Redemption Island, South Pacific, and Blood vs. Water were burned by castaways in a small fire pit as a symbol of their elimination from the game following their defeat on Redemption Island.

In Island of the Idols, at the final five, the Lumuwaku tribe moved from their camp to the Island of the Idols, where they retired their blue merge Buffs in favor of new Buffs, black ones with blue accents. Tommy Sheehan discovered that these new Buffs contained a clue to a Hidden Immunity Idol, which was then found by Dean Kowalski.

Buff is a brand of multi-functional headwear and also sells other protective equipment such as caps and gloves. Its headquarters is based in Spain.[2][3][4] 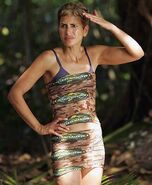 Caryn sporting Koror Buffs, one as a tube top and another as a skirt.

Debbie and Liz wearing their Chan Loh Buffs as a do rag and headband respectively.

Ozzy wearing his Malakal Buff as a neckband.

Brandon with a Buff as a wristband.

Bob popularized the bowtie as a new way to wear a Buff. 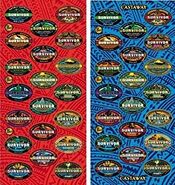 Survivor 10th year commemorative Buffs given initially during the anniversary party for security purposes (red for past and present production crew members, blue for former contestants) but were later made commercially available. 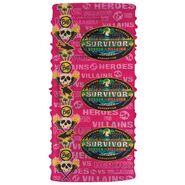 100 units of a misprinted pink version of the Heroes vs. Villains Buff were accidentally produced, but was still commercially sold on planetgearcompany.com. 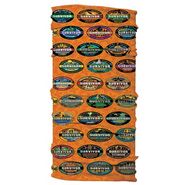 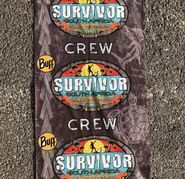 The production crew of Survivor South Africa: Island of Secrets were given their own customized Buffs.

Not counting the commemorative Buffs issued over the years, there were Buffs that were supposed to be used in the game but were shelved mostly for unknown reasons. While never seen on the show, these Buffs are considered rare and are widely sought after by Survivor fans.

A green camouflage Buff was supposed to be given for the merged tribe of Palau but was not seen on the show due to the Ulong trube's unprecedented losing streak and eventual dissolution. This Buff however became a rare collector's item among Survivor fans.

An Island of the Idols green Buff with a frog emblem was produced but was shelved for unknown reasons.[5] Unlike the Palau merge Buff, this was not commercially sold.

The supposed Buffs for Immunity Island as the season was originally planned to be filmed in the Philippines. Due to the COVID-19 pandemic however, the season was instead filmed domestically, thus these Buffs were never used.