Castaways are all given a series of symbols or items. They must memorize these symbols/items, then replicate them at their station. The first person or team to correctly recite all their symbols wins (or scores a point for their tribe in One World and in Worlds Apart).

The challenge debuted in Survivor: Africa, where the final 9 castaways had 30 seconds to look at a board of 9 items. They would then run out and collect the items and correctly place them. In the final round, Lex van den Berghe found five items, Brandon Quinton and Tom Buchanan each found six items, and Ethan Zohn came out on top with eight items, winning him individual immunity.

In Survivor: Palau, the final 5 battled it out by traversing a complicated obstacle course. Tom won the challenge, earning himself immunity.

In Survivor: Panama, the powerful Casaya Alliance chose to sit out and eat, with only Aras Baskauskas competing against Sally Schumann and Terry Deitz. For the third consecutive time, Terry won immunity.

In Survivor: Fiji, the newly merged Bula Bula tribe was randomly split into two teams of 5 for the first post-merge Immunity Challenge. The teams had to memorize a seven-symbol shape on a mask design, then row down a river, collecting three puzzle bags along the way, to the finish platform. At the finish platform, two players assembled the 12 pieces to form six of the seven symbols and place them in the right places on their team's replica of the mask. The team of Boo Bernis, Cassandra Franklin, Earl Cole, Edgardo Rivera, and Yau-Man Chan won reward and immunity.

In Survivor: Micronesia, one at a time, a castaway from each team would swim out to a multi-level net tunnel that they would have to crawl through. After another short swim, they would reach a floating platform that contained a wall with a set of Micronesian symbols laid out in a pyramid shape. The castaway would then return to the starting position and attempt to replicate the pattern of symbols onshore. The first team to match the symbols onshore with the pattern on the platform would win. The team of Amanda Kimmel, Erik Reichenbach, Jason Siska, and Ozzy Lusth won the challenge.

In Survivor: Tocantins, the contestants would have to traverse an obstacle course to a grid of ten rotating mathematical symbols. They must memorize the symbols and run back to their solving stations and use the symbols to solve a math equation. Stephen Fishbach won the challenge for immunity.

In Survivor: One World, Salani won in a clean sweep against their male rivals Manono, winning reward and their first challenge of the season.

In Survivor: Worlds Apart, Nagarote managed to win in a 3-2 victory over Escameca after Escameca members Rodney Lavoie Jr. and Mike Holloway conspired to throw the challenge in order to vote out Joe Anglim.

In Survivor: Kaôh Rōng, the challenge reappeared as the final seven Immunity Challenge. The castaways had to race out to a platform in the ocean to memorize a series of animal symbols and numbers. They then had to return to their stations to work out their numbers such that they correspond with the animals. They had to turn their wheel according to the numerical instructions to find the section with the key that unlocked a box. The box, when unlocked, held puzzle pieces which had to be put together to solve the word Blindsided. Michele Fitzgerald won the challenge after a close race with Julia Sokolowski. 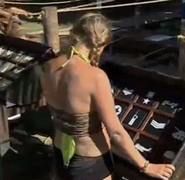 Katie studying her board in Palau.

Sally at the challenge in Panama.

Aras at the challenge in Panama.

Earl and Yau-Man compete in Fiji.

Natalie filling out the board for her team in Micronesia.

Debbie studying the symbols in Tocantins.

Sabrina scores a point for Salani in One World.

Carolyn and Rodney waiting to compete in Worlds Apart.