Merged with Samburu on Day 20

Boran​ is a tribe from Survivor: Africa.

Despite being more cohesive than the rival Samburu tribe, Boran suffered three challenge losses. However, a tribe switch on Day 13, two outsiders, brought Boran on an upswing, entering the merge with numbers and eventually taking over the game. Their tribe color is gold.

At the beginning of the game, most members of Boran started to become weak and dehydrated, notably Jessie and Diane, who became frequently nauseous during the first three days. Their weakness doubled over at the first Immunity Challenge, where they lost to the rival Samburu tribe. After the challenge, Diane fainted due to exhaustion. Back at camp, while the rest of the tribe were away gathering water, Clarence and Diane shared a whole can of beans without the others' consent. When the other six returned, they vented their disappointments to Clarence making a mistake in judgment. This statement would then bury a deeper hole for Clarence in the future. Despite this, Clarence's strength weighed more than trust, and the weaker Diane was eliminated in a 6-2 vote. Also dehydrated and weak, Jessie soon followed after Boran lost the next Immunity Challenge on Day 6.

With two members down, morale in Boran was at an all-time low. Adding insult to injury, right after Tribal Council, a pride of lions was outside their Boma fence (acacia thorn branches, the camp's only protection from predators), so the upgraded the fence and filled up some gaps. Despite their early three-challenge losing streak, Boran rebounded and won their first challenge, an important reward of a 100-gallon potable water dispenser good enough until the merge. Empowered and rejuvenated by winning the water tank, Boran then won the Day 8 Immunity Challenge, sending Samburu to their first Tribal Council the next day.

The animals continued to plague and scare Boran. On Day 11, a cape buffalo blocked the tribe's path to their water hole (their original water source that was now reduced to an area for cleaning clothes). With grunting and whistling being ineffective to scare the buffalo away, the tribe went into another direction. Their cohesiveness, however, reflected in the next Immunity Challenge, where they became victorious once more, thus sending back Samburu to Tribal Council. After Samburu's second trek to Tribal Council, the game was now even for the two tribes with six members each.

On Day 13, both tribes received a vague Tree Mail telling them to select three members of their tribe to go on "a quest." Boran chose Kelly, Lex, and Tom. Much to their shock, the three representatives from Samburu (Silas, Frank, and Teresa), now wearing similar gold buffs, came into their camp, signaling a tribe switch. The new members were welcomed with open arms, but Ethan, Kim J., and Clarence still had reservations, notably Ethan who vented in a confessional that he became sad when his closest allies Tom and Lex will now be competing against him.

Holding a grudge against the younger Samburu alliance for not treating them nicely and eliminating their allies Carl Bilancione and Linda Spencer, Teresa, and Frank (the only remaining members of the older Samburu alliance) promised their loyalty to Boran. Teresa approached Kim J. that if Boran loses at the next Immunity Challenge, they would vote out Silas, the ringleader of the younger Samburu pact. Teresa also informed Kim J. about Lindsey's past votes. Kim J. then talked to Ethan about purposefully losing the next Immunity Challenge seriously, stating that it will be a win-win situation. With Silas only taking the challenge seriously, Samburu won, sending Boran back to Tribal Council.

Back at camp, Silas approached Ethan and asked him to vote Clarence out. Knowing that it might not work, Silas then fabricated a story that Frank was the most untrustworthy person in the old Samburu. Kim J. then started to interrogate Silas about his connection with Teresa, Frank, and his former Samburu tribemates. Sensing Silas' insincerity, the original Borans ultimately sided with Teresa and Frank. They turned on Silas because of his questionable trustworthiness, and he was next to go in a 5-1 vote. With the presumed cancer of the tribe gone, the Boran tribe won the next Immunity Challenge.

On Day 20, the two competing tribes were merged into the Moto Maji tribe, and Samburu moved to Boran's old campsite for the remainder of the game. 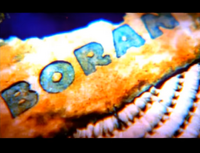 Boran's shot in the intro. 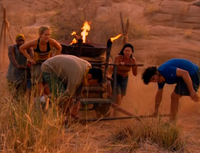 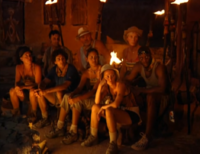 Boran at their first Tribal Council. 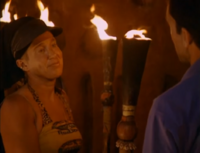 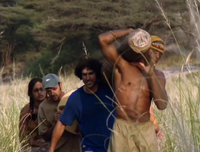 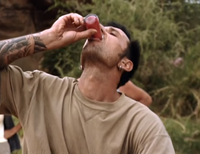 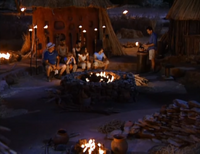 Boran at their second Tribal Council. 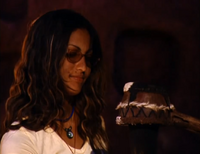 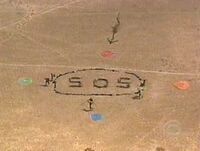 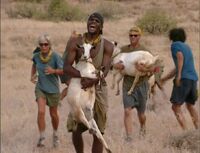 Boran at the first challenge after the tribe switch. 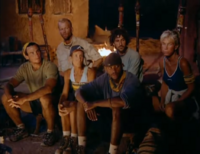 Boran at their third Tribal Council. 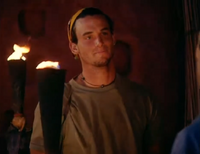 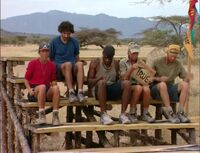 Boran at the Day 17 Reward Challenge.