Colleen Haskell (6/16)
The Barbecue Alliance is an alliance formed during Survivor: Borneo, created by the remaining members of Pagong, as opposed to the imposing Tagi Alliance.

Attempt to Break the Tagi Alliance

Colleen Haskell formed the Barbecue Alliance after inviting Jenna Lewis to her reward barbecue, for which the alliance is named. Colleen stated to Jenna that Sean Kenniff had told her Dirk Been had been eliminated with four votes, followed by Gretchen Cordy, then Greg Buis. She proceeded to say that the remaining Pagong members (the two of them, along with Gervase Peterson) could do something about it. Jenna agreed and they planned to target rival alliance Tagi Alliance's ringleader Richard Hatch.

Blindsided by the Alphabet Voter

Gervase had agreed to join, and the ex-Pagong members tried to get Sean to join, but he refused, sticking with his ABC voting strategy. A Plan B was formed when Kelly Wiglesworth was having second thoughts of staying with the rival alliance, where the alliance tried to get her vote. Kelly ended up not voting with either alliance. Instead, she voted against Sean. Colleen, Jenna, and Gervase voted against Richard. It seemed like he was doomed to go, but Richard's alliance (which includes Susan Hawk and Rudy Boesch) piggybacked on Sean's voting strategy against Jenna, eliminating her in a 4-3-1 vote.

Jenna's elimination proved fatal for the alliance, leaving Colleen and Gervase trying to defeat Tagi. Sean decided to give up his alphabet voting strategy and agreed to join them if Kelly joined them as well. Kelly decided to side with her original alliance in voting off Gervase; Colleen quickly followed after failing to win immunity. 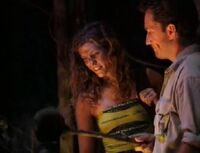 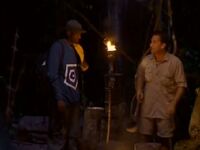 Colleen voted out.
Add a photo to this gallery

Retrieved from "https://survivor.fandom.com/wiki/Barbecue_Alliance?oldid=579961"
Community content is available under CC-BY-SA unless otherwise noted.