Merged with Samatau on Day 35

Asaga is a tribe from Australian Survivor (2017). Their tribe color is blue.

Asaga got off to a bad start in the game losing the opening Reward Challenge. They won the second Reward Challenge the following day when Jacqui and Mark W. were sent to a fire-making challenge to win fire for their tribe, but lost the Day 3 Immunity Challenge due to getting unstuck on the puzzle. Both Kent and Joan, who were in charge of the puzzle, were on the chopping block for the first vote, and the tribe agreed to split the votes between the two with the primary target on Joan due to some comments she made about sleeping well on Day 1 while the rest of the tribe didn't. However, Luke decided to stir things up by voting for Kent instead and causing a 6-6 tie, much to the surprise of the rest of the tribe. Joan was eventually sent home 7-3 on the revote.

Asaga then went on a streak of winning four straight Immunity Challenges despite losing all Reward Challenges during this period. During this time, Henry formed an alliance with Jacqui and managed to secure enough people to take out Samantha in the event of the tribe going to Tribal Council due to her paranoia and increasingly close relationship with Mark, but Asaga's immunity streak made him increasingly frustrated at not being able to take the opportunity to do so and even attempted to throw challenges without success.

The tribe finally attended their next Tribal Council on Day 16, where Henry's plan was successful and Samantha was voted out. Having now found himself in a power position, Henry then set his next target on her partner Mark. Luke and his close ally Jericho attempted a coup due to Mark's challenge strength, but it was without success and Mark was voted out 7-3.

On Day 21, Asaga were summoned to a meeting where they found Anneliese and Tara from Samatau waiting for them. They were then informed that the two women would be joining Asaga as part of a Tribe Switch after they were voted out in a fake Tribal Council, and two people would have to join Samatau in exchange. After a brief discussion, Ben volunteered to join Samatau, and in a surprising move, Henry also volunteered to switch, despite being in a power position in Asaga. Henry's move resulted in Jacqui being left exposed, and Luke's alliance of him, Jericho, Michelle and Sarah along with the two former Samataus took the opportunity to vote her out after they lost the next Immunity Challenge in order to spite Henry. Asaga lost the next Immunity Challenge on Day 24 and decided to vote out Jacqui's friend Kent next.

On Day 27, both tribes were subject to another swap, with Asaga mostly staying intact with the exception of Michelle ending up on Samatau with Anneliese returning to her old tribe, and A.K. and Peter joining. The next vote very quickly became a battle between A.K. and Tara, who he tried to send home back on Day 20, and Tara was eager to get revenge on her old rival. The tribe continued their streak of Immunity Challenge losses, and in the end, it was Tara who won out and A.K. was sent home in a 4-2-1 vote.

Asaga broke their unlucky streak by winning the next Immunity Challenge. Luke's alliance suddenly split when Sarah attempted to blindside her ally by bringing outsider Peter on board, but Luke caught wind of her plans, leaving the tribe divided between two sides. The tribe went straight back to Tribal Council after losing the Day 32 challenge with Samatau in attendance, where the tensions within the tribe blew up all for their rival tribe to see. But in another surprise non-elimination twist, the tribe were informed that there would be no vote but instead were offered the opportunity to mutiny to Samatau. Peter didn't hesitate in taking up the offer to return to his old tribe, leaving Sarah vulnerable.

A fractured Asaga were now reduced to five members, with Luke and Jericho on one side, Sarah and Tara on the other and Odette in the middle. The tribe subsequently lost another Immunity Challenge. Sarah made efforts to save herself by trying to reconcile with Luke and put forward an idea to blindside the original swing vote Odette instead due to her being perceived as a floater. The two pairs reunited and Odette was voted out unanimously.

Asaga attempts to unhook the bag of rice at the inaugural Reward Challenge.

Asaga climbs down the first platform.

Joan is comforted by her tribemates after Asaga loses.

Asaga at their first Tribal Council.

Asaga busts through a brick wall.

Asaga constructing their tower at the third Immunity Challenge.

Asaga competes against Samatau in the Chain Reaction Immunity Challenge.

Henry and Mark W. are the last two standing for Asaga.

Asaga competes against Samatau in the By the Numbers Reward Challenge.

Asaga competes against Samatau in the Polar Express Immunity Challenge. 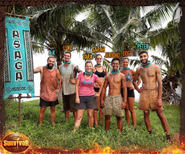 The Asaga tribe after the second tribe switch.