Portmanteau of Aitutaki and Rarotonga

Aitutonga​​ is the merged tribe of Aitutaki and Rarotonga​ from Survivor: Cook Islands.

The tribe was characterized by the divide between the former post-mutiny Rarotonga and Aitutaki, respectively. Their tribe color is black.

Aitutonga's history as a tribe started on a less than auspicious note, as the younger members of the original Rarotonga tribe got drunk at the post-merge feast, much to the chagrin of Jonathan Penner, who had become increasingly disenchanted with his much-younger comrades. It was at this point that he struck up a deal with Yul Kwon, who heavily implied that he possessed the Hidden Immunity Idol. The flippant Rarotonga members dismissed the idea offhand and planned to vote out Yul at the next Tribal Council.

Candice Woodcock and Ozzy Lusth battled it out at the next Immunity Challenge, but Ozzy was victorious, and Yul used this extra advantage to finally confirm his possession of the idol to Jonathan. Cornered by Yul's threat of arranging the Aitutaki voting bloc against Jonathan, the writer/producer joined his former Aitutaki tribemates in voting out Nate Gonzalez, 5-4.

The Rarotonga youths lashed out at Jonathan for betraying them and sulked about camp, refusing to do work. The so-called "rat" became even more unpopular after behaving obnoxiously during the Survivor Auction on Day 28. To further cement his position in the game, Yul finally confirmed to the entire tribe that he held the Hidden Immunity Idol, and Becky Lee sent Candice to Exile Island for the fourth time.

After Adam Gentry won the next Immunity Challenge, the young Rarotonga group appealed to the Aitu Four—and particularly Yul, whom he perceived to be their leader—to vote out Jonathan next, reasoning that they would still have the advantage. After Jonathan returned to camp with fish, however, the younger group chose to lay in the shelter, leading to Jonathan sneaking off with the Aitu Four and devouring the catch by themselves. When Candice caught wind of this, she publicly chastised Jonathan and stated that even his own alliance disliked him.

The outpouring of bad feelings came to a head at an explosive Tribal Council, where Adam, Candice, and Parvati Shallow lit into Jonathan for his behavior, and even the normally stoic Yul lost his temper in the face of the harsh atmosphere. In spite of the Rarotonga group's machinations, Candice was the next to go, in a 5-3 decision. She shared a prolonged make-out session with island boyfriend Adam, to which host Jeff Probst commented, "A kiss is nice, but if it were love, he'd have given you the Immunity Necklace."

The Rarotonga minority's luck worsened on Day 31 when Parvati fumbled with a machete and the medical team needed to be called in to stitch her up. This didn't stop the boxer from winning the next Reward Challenge, earning her a day with her father, Mike. Mike chose to share the reward with Adam and his father, George, and Sundra Oakley and her mother, Jeannette. Parvati also sent Jonathan to Exile Island as a form of retaliation. Alone at camp, Becky, Ozzy, and Yul briefly considered hiding food to weaken their challenge competitors, but decided against the idea. It would be inconsequential: Ozzy overwhelmingly won the following Immunity Challenge regardless.

To further himself in the game, Adam promised his jury vote for Yul in exchange for Jonathan being voted out before himself or Parvati. Drawing parallels to The Godfather, Yul organized the Aitu Four against Jonathan, who was voted out unanimously. Before leaving the game, Jonathan requested that the hat he left back at camp be returned.

Back at camp, Adam and Parvati gloated over Jonathan's dismissal and plotted a method of remaining in the game. For Parvati, this involved using her sex appeal to its fullest advantage: after she, Ozzy, and Yul won a spa reward, she took the opportunity to hot tub nude with the men of Aitutaki. With Adam sent to Exile Island yet again, Becky and Sundra were left alone back at camp. During this time, Becky tinkered with the idea of eliminating challenge threat Ozzy before either of the remaining Rarotonga members.

Any plot to eliminate Ozzy was put to a halt as he won immunity for a third time, resulting in both sides fighting over his loyalty. At Tribal Council, Yul left Jonathan's hat on the jury bench as requested and was chastised by Jeff Probst for campaigning for jury votes, which was met by controversy. Regardless, Parvati was voted out 4-2.

Come the final five, Adam knew his only chance was to win immunity. Unfortunately, Ozzy was victorious yet again. Resigned to his fate, the final Rarotonga instead attempted to goad Becky, Sundra, and Ozzy into making Yul play the Hidden Immunity Idol. The Aitu Four showed unity, though, and Adam was unanimously sent to the jury.

After completing the Rites of Passage on Day 38, the castaways were welcomed to their Final Immunity Challenge. The final four were told that this season, three people would face the jury. The grueling endurance challenge came down to Ozzy and Sundra and, despite valiant efforts from both competitors, Ozzy won his fifth and last individual Immunity Challenge.

With Ozzy immune, Yul faced a dilemma, whether he would use his Hidden Immunity Idol to save Becky (but he would have to hurtfully eliminate Sundra), or waste the idol away by not using it (though this could send Becky home should she lose). At Becky's insistence, Yul kept the idol, and Becky and Sundra both received two votes. The resulting tiebreaker would be one of the most memorable in Survivor history, as both women proved embarrassingly unable to start a fire, working fruitlessly for over an hour before being given matches, leaving Yul, Ozzy and the jury bored and restless. After chastising Becky and Sundra for not being able to make fire with flint, Jeff Probst handed them matches, but the task still took another half hour, and Sundra spent her entire matchbox. Becky finally started a blaze, and after battling for one and a half hours, Sundra could only watch as Becky lit her fire. Sundra was hopelessly sent to the jury.

After spending their last day together, Becky, Ozzy, and Yul faced the jury at the Final Tribal Council. Yul's bargaining with Adam would come back to his advantage: in a 5-4-0 vote, Yul defeated Ozzy and Becky, respectively, to become the Sole Survivor of Survivor: Cook Islands. 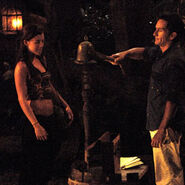 Becky and Sundra competing in a fire-making tiebreaker.

Yul, Becky, and Ozzy in the Final Three.

Yul is the Sole Survivor of Survivor: Cook Islands.