Originally the majority alliance of the post-swap Aitutaki tribe, Becky Lee, Ozzy Lusth, Sundra Oakley, and Yul Kwon were placed at a steep disadvantage after the mutiny of two tribe members. Against the odds, the four remained intact due to an impressive series of challenge victories, then managed to pick apart the majority Raro Alliance after the merge. This success was in large part due to Yul's possession of the Hidden Immunity Idol, although Ozzy's challenge prowess and the social skills of all four members also played a role. The Aitu Four made up the final four of the season, and Yul won the title of Sole Survivor narrowly over Ozzy in a 5-4-0 vote.

When the four tribes became two on Day 7, Yul bought time to expand his alliance, adding Jonathan Penner and Candice Woodcock. After losing the subsequent Immunity Challenge, an added twist that sent Candice to Exile Island ruined Yul's plans to take his new alliance in motion. To make up for Candice's absence, Yul improvised by convincing Cao Boi Bui and Jessica Smith to eliminate Cecilia Mansilla.

Voting Out the "Outcasts"

After a double elimination twist that would forcibly send "Aitu" to Tribal Council, Yul was approached by Cao Boi, who presented a plan which he called "Plan Voodoo." Cao Boi speculated that Jonathan had the Hidden Immunity Idol and there is a budding "Whites' Alliance" once the Caucasian contestants are reunited at the merge. As a solution, Cao Boi proposed that the vote should end up a 3-3 tie between Candice and Jonathan to nullify any power obtained by playing the idol. While oblivious of the fact that Yul was the true owner of the idol, this, his eccentric personality caused Cao Boi's "Plan Voodoo" to backfire, sending him home and keeping Yul's alliance intact. When Rarotonga finally broke Aitutaki's winning streak, the alliance sent Jessica home for being the alliance's outsider.

On Day 20, Candice Woodcock and Jonathan Penner both accepted the Mutiny offer and re-joined their original tribe, Rarotonga. That left Yul Kwon, Ozzy Lusth, Becky Lee, and Sundra Oakley as the last Aitutaki members. Rarotonga now had an 8-4 numbers advantage, so even one Immunity Challenge loss from Aitu would likely be fatal. The Aitu Four, however, proved that the numbers disadvantage didn't make them lose their hope, as they defeated Raro in all four remaining challenges. The original Raro core of Adam, Candice, Parvati, and Penner stayed firm in the subsequent Tribal Councils. Raro voted out Brad Virata, Rebecca Borman, and Jenny Guzon-Bae, the latter due to a twist that forced the losing tribe of the final tribal Immunity Challenge to vote out two people. With Aitu now at only a 5-4 disadvantage, the tribes merged into Aitutonga.

Merging into the newly formed Aitutonga tribe, the "Aitu Four" was down a member to create a majority. Yul was targeted by the former Rarotonga members, so Yul came up with a plan involving his Hidden Immunity Idol he found on Exile Island. Yul approached Jonathan and shows him his idol, and told Jonathan that if he declines to flip, he will be targeted by the alliance and whoever the Rarotonga bloc voted for would have the idol used at him/her, eliminating Jonathan. Left with no real choice, Penner agreed to flip and suggested to target former Rarotonga member Nate instead. At Tribal Council, Nate and the other former Rarotonga members were shocked to find that Jonathan had switched alliances again, turning Rarotonga's target to Jonathan for his treachery. Rarotonga lost Candice at the next Tribal Council. Aitutaki, however, made a deal with Rarotonga that they would blindside Jonathan at the next vote. The deal went through, eliminating Jonathan, but then Aitutaki finished Rarotonga off in the next Tribal Councils (with the help of Ozzy winning the next Immunity Challenges) eliminating Parvati and then Adam.

After finishing the Rarotonga members off, the Aitutaki Four participated in the Rites of Passage before the Final Immunity Challenge. But, before the challenge, Jeff announced that three of them would face a jury of nine, a twist that would become the default in future seasons. Ozzy would end up winning the challenge, and with Yul's idol making him virtually safe in Tribal Council, Becky and Sundra had to fight for the last spot in the Final 3. Yul debated with Becky on blindsiding Sundra but decided that a tiebreaker would be a fair settlement. At Tribal Council, Becky and Yul voted for Sundra, while Sundra and Ozzy voted for Becky. The two women faced off in a very long tiebreaker. After one whole hour of using flint to start a fire, neither of them succeeded, giving them matches to start the fire instead. After a short period of time, Sundra ran out of matches and watched while Becky burnt through her rope first and sent Sundra to the jury, making her the ninth and final jury member. Yul, Ozzy, and Becky became the members of the very first Final Three, with Sundra being the only jury member among the Aitu Four.

During the Final Tribal Council, Yul was praised for his strategy, while Ozzy was praised for his strength. Becky, however, was criticized for her perceived coat-tailing with Yul and her poor performance during the tiebreaker challenge. Yul and Ozzy were neck and neck, with several jury members as swing votes such as Candice. Yul nearly lost her vote after nearly messing up the specific instructions in her jury question involving a yes or no answer. After the jury votes were read, Yul was declared the 13th Sole Survivor in a close 5-4-0 vote against Ozzy, with Becky not receiving any votes.

Sundra voted out after a fire-making tiebreaker.

Yul, Becky, and Ozzy are the Final Three of Survivor: Cook Islands. 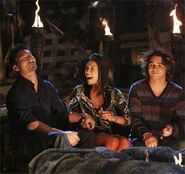 Yul is the Sole Survivor of Survivor: Cook Islands.
Add a photo to this gallery

Retrieved from "https://survivor.fandom.com/wiki/Aitu_Four?oldid=574860"
Community content is available under CC-BY-SA unless otherwise noted.