Tocantins
Heroes vs. Villains
Caramoan
A Crate Idea (also known as Crate Outdoors) is a recurring physical/puzzle challenge that originated in Survivor: Tocantins and was later used in future seasons.

Two castaways from each tribe race out to a giant tribe-colored crate. Once they reach the crate, they must roll it back to their tribe's mat. Upon reaching the tribe mat, the next pair run out to get the next crate. Once all 6 crates have been collected, the contestants would stack the crates, solving a puzzle on the side of the crates (spelling out a key word or phrase). Once all the crates have been stacked correctly, the castaways would climb up the crates to a platform. The first tribe to get all tribe members on the platform wins.

In the challenge's debut in Tocantins, Timbira was able to collect their crates first. However, Jalapao overtook them in the puzzle portion and won immunity, sending Timbira to their second consecutive Tribal Council.

The challenge later reappeared in Heroes vs. Villains. Although the Heroes collected all their crates first, a communications breakdown between several of their members allowed the much more organized Villains, under Rob Mariano's leadership to finish their puzzle first and win immunity.

In Caramoan, the challenge was supposed to be an Immunity Challenge in "Persona Non Grata", but Bikal decided to forfeit the challenge and go to Tribal Council, giving Gota immunity. It was used later in the following episode, with the physically stronger new Gota tribe winning immunity over the less physically adept new Bikal. 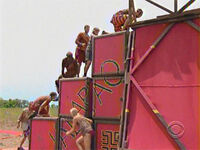 Jalapao climbs up their crates (Tocantins).

The Heroes during the challenge (Heroes vs. Villains).

The Villains during the challenge (Heroes vs. Villains).

Gota and Bikal build their staircases in Caramoan.